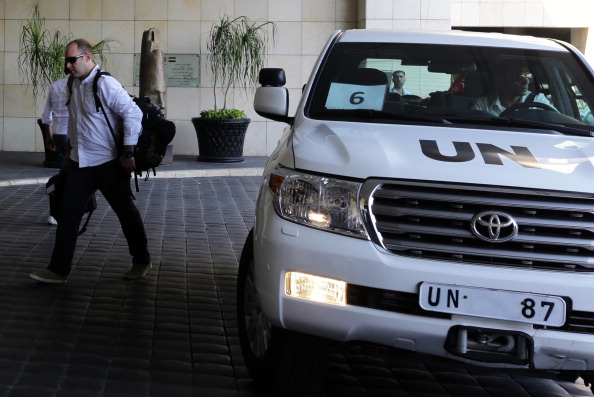 This op-ed originally appeared in MSN UK under the title “Enough hand-wringing on Syria – the world needs to take action.”

The global community has been given one last chance to turn the corner on Syria. We must take it.

It is impossible to watch the videos that emanated from Syria yesterday and not be moved, yet again, to rage about the international community’s repeated failure to end the slaughter of civilians amid the country’s internal armed conflict.

The videos – showing the deadly effects of an alleged chemical weapons attack on scores of civilians, including children, in towns outside Damascus – are just the latest chilling indication of possible war crimes and crimes against humanity in Syria.

The situation reveals the level of paralysis that has gripped the international community in dealing with Syria.

”
While it is difficult to verify the authenticity of the images or lay blame at this stage, Amnesty International has contacted medical and other experts to establish if the symptoms shown by those affected are congruent with the use of chemical weapons. Organizations and individuals in Syria are also helping us to gather further information about the current medical condition of people in the affected area.

The Syrian government has adamantly denied responsibility for the attack, but has so far failed to allow access to a U.N. team that has just arrived in Damascus after several months of negotiation to investigate earlier alleged chemical attacks. The situation reveals the level of paralysis that has gripped the international community in dealing with Syria.

This paralysis is so extreme that an emergency session of the U.N. Security Council yesterday called for “clarity” on what happened, but fell short of even calling for an investigation. Time is running fast. The U.N. team must immediately have access to the site of the alleged attack, be allowed to collect samples, gather evidence which risks being destroyed, interview victims and witnesses, and carry out its work safely in an area under the control of armed opposition groups and shelling by the government.

It would be grotesque to have a U.N. team looking into use of chemical weapons not investigate what could be the most lethal chemical attack since their use by Saddam Hussein’s regime.

Whoever was behind the attack, one thing is clear – the international community must now mobilize not only to condemn it, but to bring those responsible to justice.

Any use of chemical weapons may amount to a war crime or a crime against humanity. Even though Syria is one of only a handful of countries that haven’t signed or acceded to the Chemical Weapons Convention – which bans the use, production, stockpiling or transfer of such weapons – all states have a shared responsibility to investigate and prosecute such crimes under international law, no matter where they are committed.

Whoever was behind the attack, one thing is clear - the international community must now mobilize not only to condemn it, but to bring those responsible to justice.

”
Forming joint international investigation and prosecution teams would improve the chances of effective arrests and prosecutions. If any of those responsible were to attempt to seek safe haven abroad, under universal jurisdiction they must be arrested and investigated. U.N. Security Council members should step up and lead this effort.

The international community has been given one last chance to turn the corner on its ineffectual response to the long litany of serious violations of international human rights and humanitarian law in Syria – which have left more than 100,000 dead, millions displaced and forced almost 2 million refugees to flee.

Amnesty International has repeatedly called on the U.N. Security Council to refer the grave situation in Syria to the International Criminal Court – to begin the process of holding those responsible, on all sides, to account.

We are beyond hand-wringing on Syria. Civilians continue to be targeted or killed indiscriminately. The time for action is now.

8 thoughts on “Enough Hand-Wringing: The World Needs to Take Action on Syria”