As the credits began to roll, the lights in the theater at the University of Cincinnati turned on. I took a deep breath. Seeing the images in Dirty Wars for the fourth time, I could feel the dull ache of my sadness, but there were no tears. I just don’t have them any more. I stood, turned to the crowd, and broke the silence.

“How do you all feel right now after watching the film?”

I looked out at a mix of blank faces, confused stares, and furrowed brows. We’ve all been there – you see something awful happening in the world, and you’re stunned for a moment, processing what you just saw. Wondering what to do next. The heart of Amnesty International is people power, but the bedrock that keeps us strong is our research. We don’t rely on media reports or political rhetoric or films or any other sources. We know that Amnesty researchers painstakingly examine firsthand the evidence of human rights abuses, going directly to the people and communities that are most affected, and produce credible reports that become the foundation of our efforts to change the world.

”
This week, the Amnesty report on drone strikes in Pakistan will be released. It will include findings that the United States carried out unlawful killings in Pakistan through drone attacks, some of which could even amount to war crimes. Once the report is released, we need to raise our voices louder than ever and call on President Obama and Congress to end the Game of Drones.

As I surveyed the crowd, a young man broke the silence.

“My name is Byron,” he started. “I knew that we were using drones in other countries, but I never saw the faces of victims.” He paused, and shook his head. “I’m pissed. I can’t even process this right now.”

“I don’t know how I feel other than being sad. Almost like I’m powerless,” she said. “If our leaders and the media know about this, why isn’t anyone doing anything about it? Why are they allowing this to happen?”

“I’m hearing anger, powerlessness, and sadness,” I said, addressing the whole room. “You mention politicians and the media, but what about your friends, your classmates, and your neighbors? Do they know about this?”

I saw heads shake, and I saw eyes light up with understanding.

“All of them need to know, too, and now you can tell them. I want to remind you of a very important factor in this – the most important one. That factor is us.” 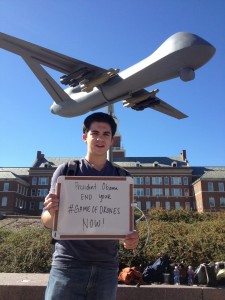 Throughout history, it has been people like us who have seen something happening and then made the choice to stand up and change it. Each of us has been there. Whether you were inspired by a parent or teacher something a teacher said, whether you read a book about a human rights defender or an article about an unfolding crisis, or whether something happened in your own community that you could not ignore, you decided that you wanted to make a difference, and that you could be silent no more.

Standing in front of the group in that theater in at the University of Cincinnati, I knew that each person in the audience was sitting on a precipice, ready to make their choice.

“We have the power to change things,” I said, and I saw heads begin to nod. “That change has to happen now. If you feel something right now, I need you to join me in the fight for justice. If you’re ready to fight for what you believe in, and to join the movement to end human rights abuses across the globe, stand up now and take the first step toward being a leader.”

Slowly, one by one, each person stood. First Chelsey, then Byron, then the rest of the room raised their fists with me. I wasn’t the only one whose face was wet with tears.