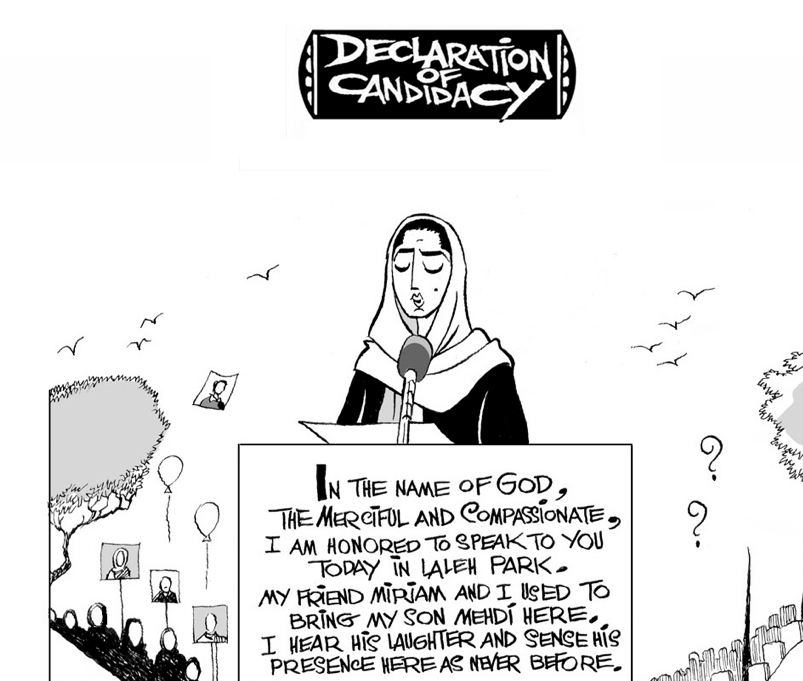 Zahra has first-hand knowledge of these abuses, having lost her son Mehdi who was killed by government agents following peaceful protests after the previous Iranian presidential election in 2009. At that time, Zahra, whose story is movingly told in the graphic novel Zahra’s Paradise, was force to negotiate a labyrinth of officialdom, trying to ascertain the fate of her son.

Having met a stonewall of opposition to her efforts, the grieving mother has decided she is not going to rely on others to bring about justice for Mehdi and the many other victims government repression and terror. Zahra is using her candidacy to ask the hard questions that the other presidential hopefuls have been studiously avoiding.

Leaving Zahra aside for a minute, the Iranian election this year has been carefully orchestrated; the Guardian Council selected only eight men out of 686 men and women who registered to run. The candidates chosen are closely tied to the circle around the Supreme Leader.

The elections are not expected to generate much excitement and none of the official candidates has the colorful personality of Iran’s outgoing president Mahmoud Ahmadinejad – whose signature humble white jacket with a hole under the arm, which he wore all the time during his first campaign and early presidency to establish his populist credentials, sold at auction for the equivalent of 34,000 pounds sterling.

Try as they might, the Iranian authorities cannot banish the fraught issue of gross violations of human rights from public awareness. The trial for those accused of responsibility for some of the most outrageous human rights abuses in the aftermath of the 2009 elections – deaths by torture that occurred in the infamous Kahrizak detention facility – has just ended and the verdict is expected soon. One of the defendants, former Tehran Prosecutor Saeed Mortazavi, has been accused of involvement in other notorious crimes – including the rape, torture and murder of Iranian Canadian journalist Zahra Kazemi in 2003.

The United Nations Committee on Economic, Social and Cultural Rights just released its Concluding Observations on Iran’s implementation of the International Covenant on Economic, Social and Cultural Rights – and harshly criticized the Iranian government for its persecution of ethnic and religious minorities, restrictions on independent labor unions, and discrimination against women, among other problems. Meanwhile, the two reformist candidates from the 2009 presidential election Mir Hossein Mousavi and Mehdi Karroubi, have been held under house arrest with virtually no contact with the outside world since February 2011.

The government has been doing its best to ensure that people will not have access to information as it has recently stepped up its crackdown against freedom of expression by arresting journalists, banning web sites and blogs and jamming satellite broadcasts.

We can probably safely assume that Zahra will not wind up filling the office soon to be vacated by President Ahmadinejad, but her stubborn insistence on pressing for human rights and accountability by the authorities for their violations makes her a powerful force to be reckoned with.

In Iran, is it only possible for a cartoon character to bring up the critical issue of human rights and to paint a vision of society where people can speak their mind freely without fear of being tortured, imprisoned or even executed?

Note: Amnesty International does not endorse any candidate, whether real or not, in any election.