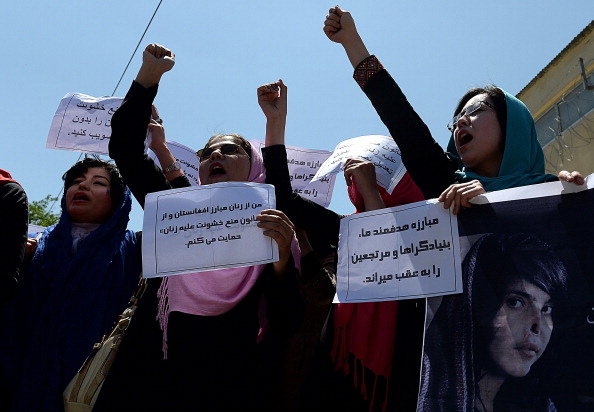 Afghan university students and independent civil society activists take part in a demonstration in support of passing the Elimination of Violence against Women law in front of Parliament in Kabul (Photo Credit: Shah Marai/AFP/Getty Images).

This is what protecting human rights looks like: responding to resounding national and international outcry, including the voices of Afghan women and Amnesty activists around the world, early this week Afghan President Karzai blocked a new discriminatory law that would have denied justice to women and girls subjected to domestic violence, rape, and forced or child marriage.

The revision to Afghanistan’s Criminal Procedure Code passed by the Afghan Parliament last month would have proven catastrophic for the ability of Afghan women and girls to seek justice when family members commit acts of violence against them by prohibiting the relatives of an accused individual from acting as witnesses during a criminal prosecution.

This draft code would have taken Afghanistan back decades in terms of discrimination of women and girls in the country.

”
Citing pressure from other countries and international civil society alike, President Karzai’s spokesperson said that necessary amendments would be made to the new Criminal Procedure Code by the Ministry of Justice to ensure that the law will not prohibit any family member from testifying against another.

Horia Mosadiq, Amnesty International’s Afghanistan researcher said, “this draft code would have taken Afghanistan back decades in terms of discrimination of women and girls in the country. President Karzai has taken a crucial step by refusing to sign the amended code.”

Yet all eyes will remain on Afghanistan to gauge whether the forthcoming changes from the Ministry of Justice will not only uphold women’s rights but reflect the recommendations of Afghan women activists and civil society leaders.

While the human rights community celebrates halting a clear threat to progress made by Afghan women for their rights, we all know much remains to be done: support must continue for the women in Afghanistan who are working so hard to advance their human rights in the midst of unrelenting efforts to erode what they’ve gained.