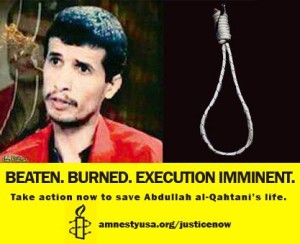 The 60,000 letters sent by Amnesty activists like you likely kept him alive then. We need you to rise to Abdullah’s defense once more.

38 prisoners have been put to death since Sunday. Many of their sentences were based on coerced confessions and grossly unfair trials. 12 of the executions were in secret.

The hangings come less than a week after UN Secretary General Ban Ki-moon called on Iraqi authorities to put a moratorium on executions.

This week, Iraq’s presidency’s office ratified 200 cases of people sentenced to death, paving the way for their immediate execution – and we expect executions will continue.

Please come together with Amnesty right now to stop Abdullah al-Qahtani ‘s execution. Take action with us and save his life.