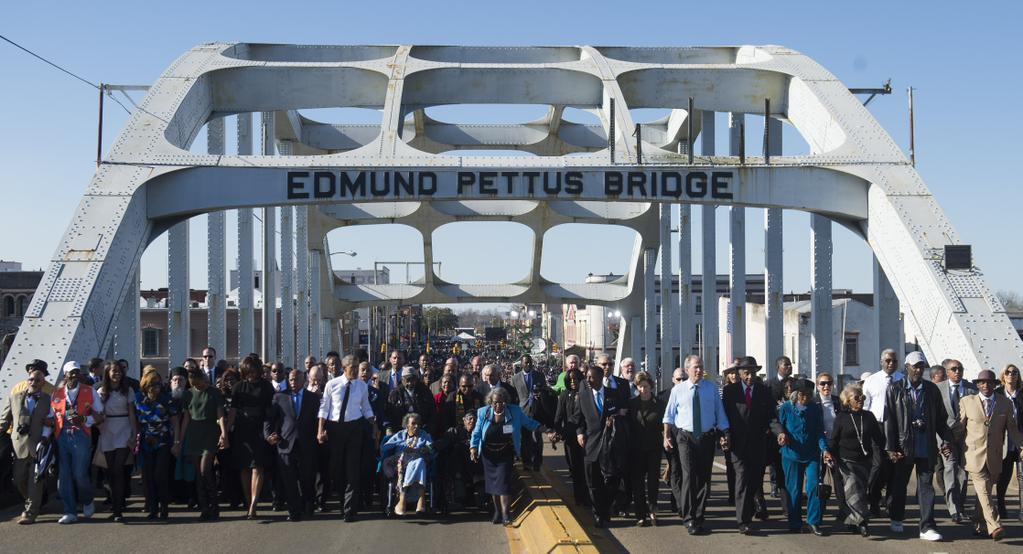 I was privileged to be part of an Amnesty International delegation to the Selma Jubilee, headed by Executive Director Steve Hawkins, and including about 50 activists and staff from the Chicago area, St. Louis, Atlanta, New York and DC. Activists in Selma
Alabama with Edmund Pettus Bridge in background

Among the most memorable moments were, of course, the ceremonial crossing of the Edmund Pettus Bridge, together with tens of thousands of other people, listening to addresses by President Obama, John Lewis (one of the leaders of the 1965 march) and others, and meeting and speaking with people from all over the country and with some of the original “foot soldiers” who risked life and limb that day fifty years ago to cross the bridge so future generations could have the right to vote.

Those of us who attended the commemorations in Selma were inspired and humbled by the sacrifices made by our great civil rights activists. We also learned that we still have a long way to go before our dream of justice and respect for the human rights for all people in the United States is fulfilled. This was brought home by recent news stories, for instance, about the injustices perpetrated by local authorities against the African-American citizens of Ferguson, Missouri, and brutal violence against mostly African-American inmates by prison guards in New York.

But being the Iran country specialist for AIUSA, I could not help comparing the incredible courage displayed by the foot soldiers of March 1965 with the peaceful protesters in Iran of June 2009, who also engaged in peaceful demonstrations over the presidential elections and were met with violence by government agents. Those who killed, maimed and terrorized the peaceful protesters during and in the aftermath of the demonstrations have not been brought to justice while two of the “reformist” candidates running against the declared winner, Mahmoud Ahmadinejad, remain under house arrest after more than four years.

One of the great strengths of Amnesty is the credibility and authority we have when we decry human rights violations around the world; we shine the light on abuses wherever they happen and are no less vigilant about speaking out against human rights here at home than we are about protesting human rights in countries like Iran that do not maintain cordial relations with our government. As a matter of fact, the only way we gain this authority and credibility is by holding every single country around the world to the same standards. We criticize violence against those peacefully demonstrating for voting rights and other causes everywhere in the world and celebrate the courage and commitment of dedicated voting rights activists in Iran, in the United States and in all other nations.

So I guess it’s not so strange that an Iran activist wound up in Selma Alabama.

4 thoughts on “An Iran Specialist Goes to Selma”