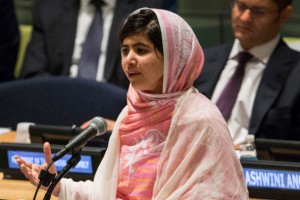 Last Friday, the world watched in awe as Malala Yousafzai addressed international leaders and youth on her 16th birthday at the U.N. General Assembly. Her message was clear: protect the right to education for young people across the world. I was fortunate to witness this historic moment along with 500 youth delegates representing more than 80 countries.

In the lead up to #Malaladay, youth leaders worked tirelessly to draft a youth resolution on education. This collaborative initiative was led by the Youth Advocacy Group and the resolution was amended by hundreds of youth delegates. In this effort, Amnesty International youth delegates and other youth asserted the need to include human rights language in the final document of the Youth Resolution. This measure was vital in strengthening the youth resolution and establishing a human rights framework for addressing the education emergency.

These efforts culminated in Malala delivering the youth resolution to U.N. Secretary General Ban Ki-moon as part of the world’s first ever U.N. youth takeover. This was a major milestone for our generation in demanding and shaping the advancement of human rights.

As Malala finished speaking, the General Assembly erupted in cheers. Her speech was followed by an unforgettably powerful serenade of the entire youth delegation singing “Happy Birthday” to Malala. This moment captured the spirit of this event and the resilience of Malala Yousafzai: it was a moment celebrating Malala’s life in a sense that the Taliban would have never envisioned some nine months earlier.

The remainder of the day included breakout sessions, workshops and discussions among youth delegates as we debated effective methods to advance the right to education. Amnesty International delegates engaged youth leaders in highlighting the security and violence barriers to education, and the ongoing blockade of the Gaza Strip, as well as Amnesty’s efforts to ensure access to education worldwide. #Malaladay was an immense success and a compelling remainder that much advocacy is still needed to establish universal education.