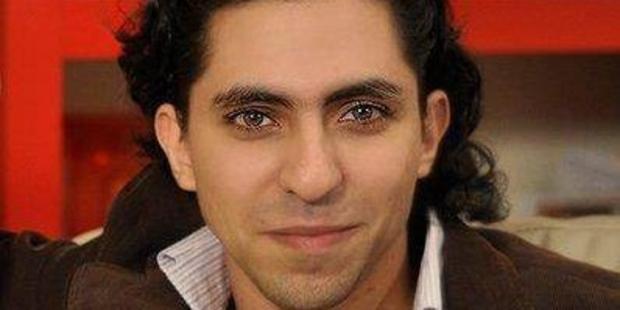 Raif Badawi, co-founder of the “Saudi Arabian Liberals” website, was sentenced to 10 years in prison, 1,000 lashes and a fine of 1 million Saudi riyals by Jeddah’s Criminal Court (Photo Credit: Private).

I still pursue that mirage…two years have passed and I am still faced with a scorching emptiness and a series of agonizing questions.

When will he be back, and in what condition? What will I put on, and how will I react? Should I hug him, kiss him, or should I cry?

I wake up to the torture inflicted upon me by our children’s questions, like: “Mom, will we be leaving tomorrow without Dad, to fly from Beirut to Canada? Will I be afraid of flying? Dad used to help me overcome my fear.”

Raif is no criminal; instead, he is a prisoner of conscience.'

”
Eventually I gave in to the increasing persistence of my three angels, who kept pounding me with questions about the reason behind their father’s long and strange absence.

Without meaning to, I told them that he is banned from travelling abroad because of a problem with the Saudi regime. This only led to more questions, and I ended up wishing I had not answered any in the first place.

First thing one recent morning, a telephone call from one of Raif’s friends woke me up. He had attended Raif’s trial back in Riyadh on May 7, 2014. He told me that they had increased Raif’s original sentence of six years and 600 lashes.

I hung up the phone and was overcome with anxiety and stress before bursting into tears. I pulled myself together and recalled that Raif had promised me that he will come back – I do not know when, but he promised me he will!

Every opportunity I get, I always reiterate the same message to the Saudi government. They know very well that Raif is no criminal; instead, he is a prisoner of conscience. The authorities have to abide by the international treaties that provide for the freedom of expression. I wonder whether or not they will ever heed my words.

Until our absent loved one returns, I want my children to try to live as normal a life as possible. And so, we escaped Saudi Arabia and recently arrived in Canada after a journey via Cairo and Beirut.

I am full of gratitude towards every individual in this world who has supported me and Raif. Particularly Amnesty International, who exerted all efforts across its sections worldwide to contribute to one of the greatest human rights sagas we have ever known. I thank Amnesty’s activists and supporters, and I thank Raif, who taught me how to hang on, be resilient and continue fighting to win him back.

He probably won’t be able to come back soon, but I will have him back one day, for he promised me, and that’s a sure thing. What matters is that he comes back to be around and fill life with joy, love and struggle. Then the mirage will become a reality.

Join me in calling for Raif’s freedom from Saudi authorities.