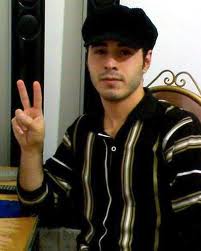 Hossein Ronaghi Maleki was a 24-year-old computer whiz and blogger when he was arrested in Iran in December 2009. After spending most of the last four years behind bars as a prisoner of conscience, he is now in a deplorable condition, in dire need of medical attention that he is not receiving.

After having one kidney removed because of a kidney disorder contracted in the filthy prison where he was kept, he now has a serious infection in his remaining kidney.

Incredibly, when he was re-arrested in August 2012 after spending a short period of time out of prison to get an operation, he was brutally beaten in the kidney area, causing his surgical wound to bleed.

Hossein Ronaghi Maleki has gone on hunger strikes to protest his mistreatment, but to no avail. He still has not been granted the medical furlough to which he is entitled.

Meanwhile labor activist Reza Shahabi, serving a six-year prison sentence in Tehran’s Evin Prison, suffers from severe back pain and numbness in his left foot. According to doctors, he could suffer paralysis on the left side of his body if he does not obtain treatment outside of prison.

”
I read many painful stories about the suffering inflicted upon the Iranian people by its government, but I can never get used to the tragedy of healthy, vibrant young people, guilty of nothing more than trying to create a better world for their fellow citizens, turning into physical wrecks because of the miserable treatment and prison conditions they are forced to endure.

And many people don’t survive. Even if they are not among the hundreds of people executed every year (Iran executes more people than any other country after China), their prison sentences can become effective death sentences.

In June 2013, Afshin Ossanlu, the brother of prominent trade union leader Mansour Ossanlu, suffered an apparent heart attack in Raja’i Shahr Prison and died soon afterward, under questionable circumstances. Although he did not have a known heart condition, he had been subjected to brutal beatings, resulting in broken bones to his head and face and broken teeth, since his arrest in December 2010.

He was not the only prisoner who succumbed to the combination of injuries inflicted during torture and medical neglect for illnesses resulting from horrendous prison conditions. In January 2010, Alborz Ghassemi-Shall died in prison. Iranian authorities told his family that he had died from stomach cancer, but the coroner who examined his body reported a large head injury.

Political prisoners in Iran, including prisoners of conscience, are routinely subjected to inhumane and degrading prison conditions that violate international law, including overcrowding, poor food and water, and dirty and unsanitary facilities.

The failure to provide adequate medical care to vulnerable prisoners is a breach of international human rights standards, including the prohibition against torture and other ill-treatment under the International Covenant on Civil and Political Rights, to which Iran is a party. The U.N. Standard Minimum Rules for the Treatment of Prisoners also states that prisoners who require specialist treatment must be transferred to specialist institutions or civil hospitals.

Iran’s own prison regulations require that prisoners who are suffering from serious medical conditions that cannot be treated inside prison, or whose conditions will worsen if they stay in prison, be granted medical leave in order to receive treatment. Yet political prisoners who seek medical leave to enable them to receive the urgent or specialized medical care to which they are entitled, often see their requests arbitrarily rejected and appear to be routinely discriminated against by the prison administration.

Iranian political prisoners will often stage hunger strikes – their only recourse – to protest the denial of proper medical care. Numbers of political prisoners will also undertake concerted solidarity hunger strikes to protest the mistreatment or neglect of their fellow prisoners. But prisoners in Iran should not have to resort to such extreme measures, which further jeopardize their health, in order to obtain what should be their basic human rights.

Of course, these two, and so many others, should not be in prison at all, but at the very least, while they are in prison they must be treated like human beings – please help to make sure these courageous men don’t become yet two more sad statistics.