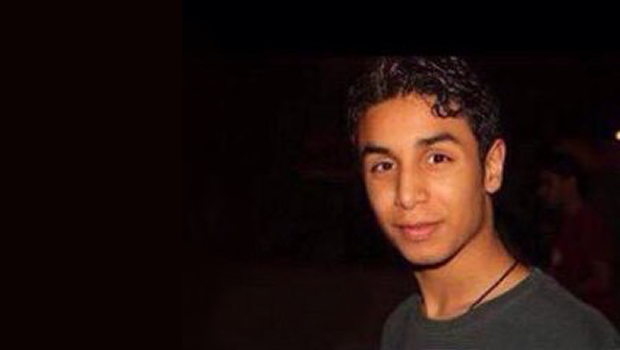 Looking at that bicycle brings back painful memories of my young son Ali Mohammed al-Nimr, who has been sentenced to death and is facing imminent execution in my homeland, the Kingdom of Saudi Arabia.

I remember Ali standing before me when I promised to buy him that bicycle if he passed sixth grade. I recall how happy he was when we went to buy it together. He was over the moon, just like any other young boy would be, to get his first bicycle.

I remember how his elder brother taught him how to ride it, and how I would warn him to look both ways on the road and watch out for reckless drivers. What pain filled my heart every time he fell! I am his father after all.

These scenes rush through my mind every time I walk in the streets of my beautiful home village, Awamiyya, and see children riding their bicycles. I always pray for God to protect them, but I cannot always hold back the tears.

To me that shiny bicycle symbolizes his radiance which, in his absence I, his mother, brothers and sisters still observe every moment, throughout the house.

In our minds, we see him every day – on the stairs, jumping up two or three steps at a time – in the basement, where he used to go when he felt bored.

We see him at the front door, in the kitchen, in the living room, out in the garden or the blue room, where he enjoyed spending some time alone.

Young Ali is in every corner of the house as well as in the hearts of his mother, father, brothers and sisters.

His bed has not been made since 15 February 2012, the day he was arrested. That day, an armoured police patrol car ran him over. The officers took him to hospital before placing him in a juvenile facility. Later he was locked up at the al-Mabahith prison in al-Dammam.

The day Ali was sentenced to death a friend of mine wrote to me saying that I was right when I picked the name “Ali” for my son, for the word Ali is derived from the word “pride”, and Ali is indeed my pride and joy.

He was sentenced to death by a judge under the pretense of religion, on political orders. Having such a sentence read out loud to him was terrifying for the young boy. Those difficult moments only eased when he said, in a nonchalant, confident manner “so be it”.

How I wished at that moment, and continue to wish, that he was an orphan rather than a son whose father was about to lose him. He had yet to enjoy the rest of his youth.
Everyone was shocked by the sentence. His mother collapsed and fainted after hearing the news.

I asked time and again about the legitimacy of such a sentence in international conventions and treaties signed by my country. Do such treaties allow individuals to be arrested for having a different opinion?  Do these instruments permit running children over with armoured vehicles?

Such are my thoughts and emotions towards the most precious of my treasures, my son and young cub, Ali Mohammed al-Nimr (Nimr means tiger in Arabic).

My young Ali is not more precious than Ali Qarayris, Ali al-Fulful, or any of those who were killed in protests in Qatif, in Saudi Arabia’s Eastern Province, or others defending their dignity and demanding their rights. I consider all of them my children, like Ali.

This young cub of mine is a sacrifice of loyalty to my brother, Ali’s uncle, Sheikh Nimr al-Nimr, who has also been sentenced to death. He is a victim of insane policies and sectarianism. It is time for such discriminatory policies, in this homeland of ours that we all love and cherish, to end once and for all.

I also have fond memories of my brother Sheikh Nimr, who is three years older than me. He and I spent 13 years abroad together in our twenties. My family and I sought refuge in his tiny 50 square-metre apartment where he received us with generosity and offered us first whatever food he brought home to his family.

It is no secret I have chosen the path of social work and activism to address the concerns of my home country, Saudi Arabia. I might sometimes disagree with my brother but no two people from our home village would ever disagree that our priority must be to restore our rights and end sectarian discrimination.