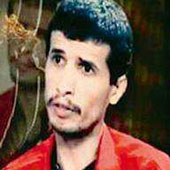 This week my brother’s life could be taken for a “confession” he was tortured into making. Abdullah was beaten, burned and asphyxiated by Iraqi security forces into “confessing” to being a member of terrorist organization al-Qaeda.

Now our fear is that the Iraqi authorities will execute Abdullah without even allowing him to have a fair trial first. It could happen at any time now.

Please do what you can to stop this execution.

About a month ago, Amnesty called on you to stop my brother’s execution. Together, we have been successful in buying some time. For that, I would like to express my family’s heartfelt thanks and gratitude to you, Amnesty supporters, for your precious help and support. It has brought much needed attention to Abdullah’s plight.

However, Abdullah’s time is once again running out. If the Iraqi court agrees with the prosecutor that Abdullah should not get a new trial, then a deadly chain of events would be put in motion. In less than 24 hours – without fair trial or even a phone call to us, his family – Abdullah’s execution could be carried out.

Abdullah needs an opportunity to present his case fully and fairly. He deserves the chance to exercise his human rights.

This risk of execution has placed our family under great stress. Abdullah is in poor health after enduring both torture and the effects of a hunger strike. Our parents are suffering. I don’t know if our mother has the strength to survive if Abdullah were to be executed.

We plead with Amnesty and its supporters to do everything possible to stop Abdullah from being treated inhumanely and for his rights to be restored.

Please take this action now. Help me save my brother’s life.

3 thoughts on “A Brother’s Plea: Stop This Execution”