Millions of Afghan girls are going to school. Many women now have access to education, employment, basic healthcare and other essential services that previously were off limits to them. Amnesty International is urging presidential candidates to use the elections as an opportunity to support and improve the women’s rights situation and ensure women’s participation in peace building in Afghanistan.

To improve human rights – and women’s rights – in Afghanistan, there are 7 things that the new President must do:

1. Fulfill the Human Rights of Women and Girls

This not only means protecting and promoting women’s and girls’ rights and security, but also supporting women’s engagement so that they are not marginalized but are leaders and participants in this transfer of power. Currently, women’s human rights defenders face threats, intimidation and attack without adequate government protection. Violence against women and girls continues to be rife across the country and implementation of the Law on Elimination of Violence Against Women continues to be limited. The new president must make supporting ALL of women’s human rights one of his top priorities.

The elections represent much more than the appointment of a president. For Afghanistan ... it signals the beginning of a new era.

Trial proceedings in Afghanistan fall short of international standards of fair trial and by the end of 2013, more than 300 people remained on death row, with 174 death sentences issued in 2013 across Afghanistan.

Judicial decisions are largely based on confessions from the accused, which are often coerced, including through torture or other ill-treatment. The new president must take immediate action to end the death penalty in Afghanistan.

The new President must ensure that all allegations of civilian casualties and harm resulting from national and international military operations are fully investigated and that a credible independent mechanism to monitor, investigate, report and provide remedy is created. 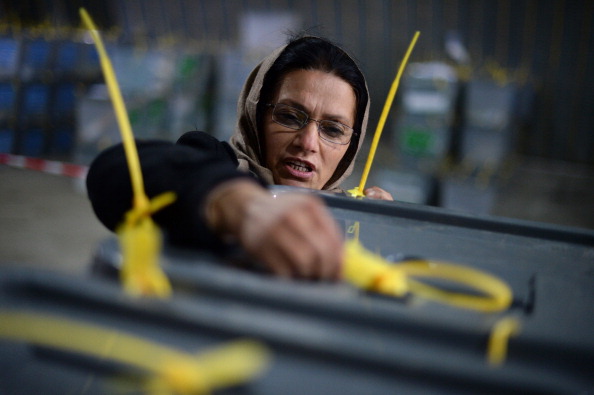 An Afghan election commission worker takes notes of serial numbers of ballot boxes at a counting center at a warehouse.
Afghanistan’s third presidential election brings an end to 13 years of rule by Karzai, who has held power since the Taliban were ousted in a US-led invasion in 2001, and will be the first democratic handover of power in the country’s turbulent history (Photo Credit: Wakil Kohsar/AFP/Getty Images).

According to UNHCR, there are around 600,000 internally displaced persons (IDPs) in Afghanistan, largely as a result of the conflict. Many experience multiple human rights violations including forced evictions, inadequate housing and lack of access to affordable food, water, health and education, sometimes leading to further instability in otherwise relatively stable urban areas.

The new president must ensure that all necessary measures are taken to minimize displacement in areas affected by military operations; and help expand access for humanitarian actors seeking to meet the emergency needs of all IDPs and displacement-affected communities.

6. End Impunity for Past Human Rights Abuses and War Crimes

7. Protect and Respect Freedom of Expression

The new president must protect and respect freedom of expression in Afghanistan. Since 2001, more than 450 journalists and other media workers in Afghanistan, including 54 in 2013, have been killed, injured, beaten, threatened or detained.

Afghan journalists are finding it increasingly difficult to report on cases of corruption and criminal activity by government officials and members of the Afghan parliament, as well as reporting on cases of other human rights violations committed by the Taliban.

Afghanistan’s election presents a historic opportunity for the new president to put human rights, and women’s rights, first on the agenda.