Over the following year, the conflict has spread and fighting has engulfed the entire country. Horrific human rights abuses, as well as war crimes, are being committed throughout the country causing unbearable suffering for civilians.

“We came here to escape the war… My girls were killed and I wish I had died with them.” -Salama, who lost three daughters in the bombing of a school in Aden

As well as relentless bombardment by coalition forces from the air, there is a battle being fought on the ground between rival factions. On one side are the Huthis, an armed group whose members belong to a branch of Shi’a Islam known as Zayidism. The Huthis are allied with supporters of Yemen’s former President Ali Abdullah Saleh. On the other side are anti-Huthi forces that are allied with the current President Abd Rabbu Mansour Hadi and the Saudi Arabian-led coalition.

Civilians are trapped in the middle – thousands of them have been killed and injured and a humanitarian crisis has spiraled.

For a year much of the world has ignored this raging conflict and heard little about its devastating consequences.
[slideshow_deploy id=’69816′]

Civilians bear the brunt of the violence in Yemen. As well as causing the deaths and injuries of civilians, the conflict has exacerbated an already severe humanitarian crisis resulting from years of poverty and poor governance causing immense human suffering.

At least 83% of Yemenis today rely on some form of humanitarian assistance in order to survive.

Coalition forces have  imposed a partial aerial and naval blockade on areas under Huthi control to cut off supplies. This is severely limiting the import and provision of fuel and other essentials, obstructing access to food, water, humanitarian assistance and medical supplies and causing food prices to soar, creating a desperate situation for millions of people.

“My son was 14 hours old when he died… the doctors told us he needed intensive care and oxygen…We took him to every hospital we possibly could before he finally died. I wanted to take him outside the city but there was no way out.”

-Mohamed, father of new born baby who died due to shortages of oxygen in Tai’z in December 2015

Damage to key logistical infrastructure, including bridges, airports and seaports, has also severely hampered the movement of crucial humanitarian supplies.
[slideshow_deploy id=’69881′]
The Huthi armed group and allied forces have endangered the lives of thousands of civilians in the southern city of Ta’iz by blocking the entry of crucial medical supplies and food in recent months. Most of the city’s hospitals were forced to shut down, and the few that remain open have been on the verge of collapse due to a lack of supplies.

Who is fighting whom?

On one side is the Huthi armed group, often referred to as the “Popular Committees”, which is supported by certain army units and armed groups loyal to former Yemeni President Ali Abdullah Saleh.

On the other side is the military coalition led by Saudi Arabia and supported by President Hadi, which has carried out air strikes and ground operations in Yemen. Members of the coalition include the United Arab Emirates, Egypt, Bahrain, Kuwait, Qatar, Morocco, Jordan and Sudan. The USA and UK have provided key intelligence and logistical support. Somalia has made its airspace, territorial waters and military bases available to the coalition and Senegal has promised troops.

The coalition is allied with anti-Huthi armed groups operating on the ground in Yemen, often referred to as “Popular Resistance Committees”. They are also supported by units of armed forces and other factions loyal to President Hadi. 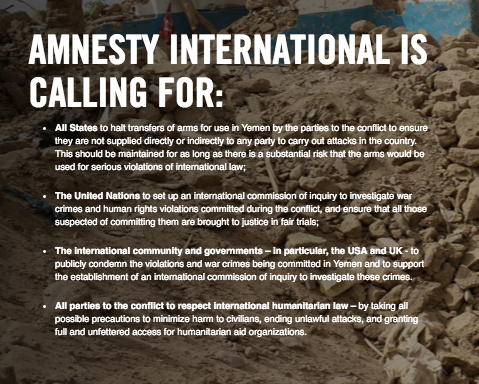