From Repression, to Tolerance, and Back Again

In recent years, the ruling AKP has alternated between allowing May Day demonstrations in the square and employing police violence to prevent them. As an Amnesty statement noted in advance of this year’s demonstrations:

After several years in which large-scale rallies were held in Taksim without incident, Turkish authorities decided last year to close off access to the square.

Given all this, today's crackdown on freedom of expression and assembly was utterly predictable, as was the violence that resulted.

”
The result, as I wrote last year, was that “vast sections of Istanbul looked like a war zone, as authorities closed down public transportation and security forces employed water cannon and tear gas against peaceful protesters.” There was, I argued, “a disturbing pattern here: Middle East Technical University, Emek, and now May Day….With startling regularity, peaceful protests are met with overwhelming police presence and unexplained limits on the right to assembly.”

Police were not held to account for their abuses, but, as Amnesty writes, the “trial of 33 people accused of taking part in the unauthorized 2013 Mayday demonstrations continues. If convicted they face up to three years imprisonment.”

Indeed the “disturbing pattern” that I saw last year continued and intensified. Only a month later, Turkey would be rocked by what has been termed the “Gezi Protests”  More suppression of the rights of freedom of expression and assembly, more police violence, more injuries, more impunity.

The government’s response to public and international outcry has been to seek scapegoats, intensify its pressure on dissenting voices, and maximize its control over the levers of state.

Only last month, a new intelligence law was passed which greatly increased the intelligence service’s capacity to act with impunity and to spy on its citizens, while dramatically extending the government’s ability to punish journalists who publish leaked information.

As Human Rights Watch’s Kenneth Roth stated, were this law in effect in the United States, the editors of the Washington Post would have had to celebrate their recent Pulitzer Prize in prison.

Given all this, today’s crackdown on freedom of expression and assembly was utterly predictable, as was the violence that resulted. Certainly, the Turkish government seemed ready for a fight.

“Give up your hope of Taksim,” Turkish Prime Minister Tayyip Erdogan warned. Important transportation hubs were closed and, according to press reports, nearly 40,000 police were mobilized. Not only Taksim Square itself, but streets throughout the city were barricaded and guarded by phalanxes of heavily armed police. Large sections of the city were, effectively shut down. 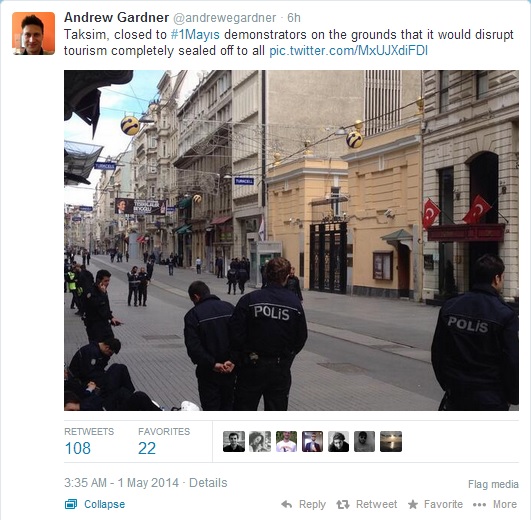 Why? Variously, according to government officials, to “ensure the safety of the people” and because it would disrupt traffic in Taksim Square. Instead, the government initiated a policy which has reportedly resulted in scores injured, many seriously, and locked down the city. Normally vibrant Taksim today was occupied only by police and pigeons.

Meanwhile, the ugly pattern of police abuse continues. Scores have reportedly been injured, many seriously. Water cannon and tear gas were used repeatedly against peaceful crowds. In some places, protesters responded with rocks or slingshots.  Amnesty has called the violence employed as “reprehensible”:

“A peaceful march this morning was cut off by a human wall of riot police blocking the main access road from ªiºli into Taksim Square, the epicentre of last year’s Gezi Park protests,” said Andrew Gardner, Amnesty International’s Turkey expert, who witnessed the events first-hand.

Gardner describes “the abusive tactics” of tear gas and water cannon that he witnessed today as “the Turkish authorities’ stock response to peaceful protests.”

As I write these lines, the violence in Istanbul and elsewhere in Turkey continues, while major arteries within Istanbul are still closed.

It seems that the pattern of police violence and the suppression of basic freedoms has been set. In a month will be the anniversary of the Gezi Protests. I fear we are in for a long, hot summer.

One thought on “What’s Behind Turkey’s Crackdown on the May 1 Protests?”