In the wake of the disaster, Amnesty’s Andrew Gardner highlighted that this tragedy could have been averted:

The long history of deaths in mines in Turkey raises chilling questions over workers’ safety. The fact that the government rejected recent calls by parliamentarians to investigate serious work-related accidents is nothing short of shocking. They are playing with people’s lives.

Turkish officials have, in fact, initiated an investigation into the causes of the mining disaster and a number of people have been taken into custody.

Prime Minister Recep Tayyip Erdogan has promised that the “no one will be able to cover up this painful incident. All criminal and administrative investigations will be carried out and we will be strictly monitoring them.”

The question is whether these investigations will be truly impartial and will effectively address potential negligence on the part of the government, as well as industry.

Journalists who have been covering the mining disaster closely, like Alexander Christie Miller of the Christian Science Monitor and London Times, have noted that lackadaisical safety procedures seem to be the norm in Turkish mines. Workers at the Soma mine report that inspections are ineffectual and that worker complaints result in punishment.

Yilmaz said that inspections do take place, but they are announced weeks in advance, allowing the company to correct misdemeanors, whitewash the working conditions and obtain a clean bill of health.

We always prepared for these visits, cleaning everything, temporarily closing dangerous shafts, hiding faulty machines. In our mine, we are not allowed to use diesel-fueled machinery. These machines were hidden away for the inspections. We were also instructed to tell them that everything was just fine, that we were happy.

Yilmaz’s account is supported by those of other miners who have expressed their grievances to the Turkish media. International experts have also been highly critical of the mining operation in Soma and work safety in Turkish mines in general.

Turkish authorities have promised a full investigation. It remains to be seen whether the government is willing to look at its own policies and personnel as they move forward. 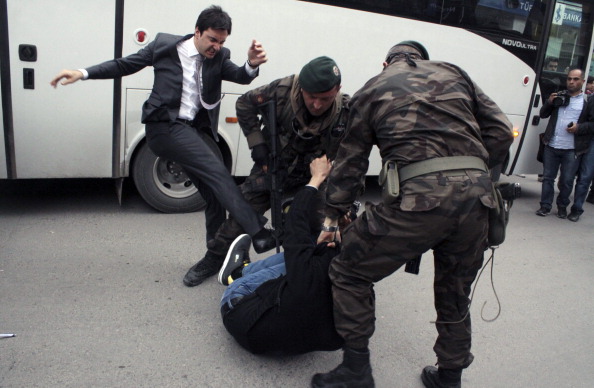 Cracking Down on Dissent

It is a sad statement on the government’s response to the Soma disaster that arguably the most striking image to emerge is the photograph of a top aide to Prime Minister Erdogan, Yusuf Yerkel, brutally kicking a prone demonstrator who is being held by two gendarmes. No charges have been brought against Yerkel or, indeed the two gendarmes, though he was given seven days sick leave, as the Guardian notes, “after being diagnosed with soft tissue trauma in his right leg – the one he used to lay in to the demonstrator.”

Yerkel’s “kick seen round the world” was, however, only highlighted the ham-fisted use excessive force in the face of demonstrations after the Soma disaster.

Public anger about the deaths and the government’s botched response has spilled into protests throughout the country, which again have been met with police dispersing demonstrators with water cannon and teargas, by Friday afternoon even in Soma.

For its part, the Turkish government has blamed the bad press on, well, the press. Erdogan, for example, has suggested that the BBC fabricated interviews in its coverage of the Soma Disaster. Not surprisingly, the BBC has denied these claims.

In cities throughout Turkey, demonstrations were met with tear gas, water cannon, plastic bullets, and truncheon. Even demonstrations in Soma were met by shocking police violence and the Governor’s Office banned all protests in the region.

Clearly, the Turkish government has chosen to respond to these protests with the same violence and disdain for the rights of freedom of expression and assembly that it has demonstrated repeatedly in recent years.

Nor is there any sign that this behavior will change as the country approaches the first anniversary of the Gezi Protests. The Turkish press today has reported that the government is spending more than six million dollars on a fleet of 25 new TOMAs, or water cannon trucks.

This past September, Amnesty called for a suspension on “shipments of tear gas, armored vehicles and other riot control projectile equipment to Turkey until the Turkish authorities can guarantee protesters’ right to peaceful assembly and freedom of expression.”

It was not immediately clear whether the new TOMA are to be produced domestically or not.  What is clear, however, is that the Turkish government’s strategy of using blunt force to stifle dissent continues unabated.

The Turkish government has an obligation to fully and impartially investigate the tragedy in Soma, to ensure that appropriate steps are taken to safeguard workers in the future, and to hold those responsible – whether in industry or in government – to account. It also has an obligation to protect the basic freedoms of assembly and expression and to hold security forces – or indeed ministerial aides – account for abuses.

Workers should not have to live in fear to earn their livings and support their families.  Citizens should not need to risk beatings and abuse to have their voices heard.