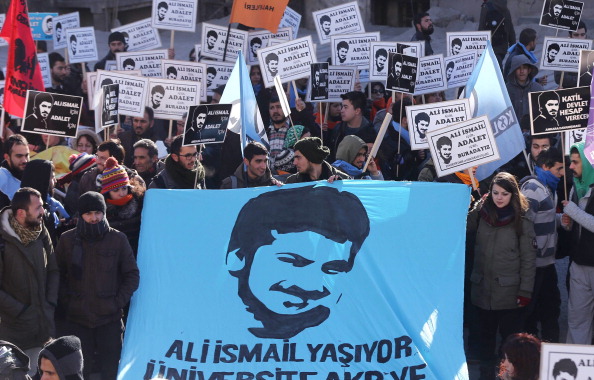 Thousands of people, holding placards that read “We are here for Ali Ismail and for justice” gather outside a local courthouse (Photo Credit: Adem Altan/AFP/Getty Images).

Ali Ismail Korkmaz was among those killed during the Gezi protests in Turkey last June. He would have celebrated his twentieth birthday today. Today, let’s work to ensure that his family sees justice done.

Korkmaz was savagely beaten on June 2, 2013 during the Gezi Protests. In a statement to authorities before he died, Korkmaz he described the attack:

Five or six people came up to me, they beat me with clubs on my head, back, shoulder and legs. I fell to the ground….Yesterday I didn’t have difficulty in speaking, but today I can’t remember. One of my teeth is loose because of the incident. My head hurts, I have difficulty speaking. I don’t know who beat me or why. They were wearing civilian clothes. I want to make a complaint

Korkmaz was admitted to a hospital after making his statement, but soon fell into a coma. He died on July 10, 2013.

This trial is an important one: a rare case which challenges the culture of impunity in which Turkish authorities typically work. Let's make our voices heard.

”
As Amnesty’s researcher on Turkey, Andrew Gardner, notes in a recent blog, Turkish authorities seemed determined to undermine the quest for justice in the case. Following the attack, the Governor of Eskisehir said that police hadn’t been involved and that Ali Ismail Korkmaz had been beaten up ‘by his friends.’ Footage from a CCTV camera was deleted in the days following the incident, but was subsequently recovered by experts from the gendarmerie.

Now, four civilians and four police who have been accused in the killing of Ali Ismail Korkmaz are on trial in the provincial Turkish city of Kayseri. Attempts by protesters to come to the city have been stymied and thousands of riot police were on hand for the first court session. But the mere fact that the trial is taking place is “extraordinary,” according to Gardner.

Amnesty has been following the case closely, sending observers to the trials and working to ensure this case is not forgotten. This trial is an important one: a rare case which challenges the culture of impunity in which Turkish authorities typically work.

Amnesty International – Turkey has introduced a twitter campaign calling for justice in the case of Ali Ismail Korkmaz:

Two Ways You Can Use Twitter in the Fight for Justice:

1.  Let the Turkish government know that concern for justice in this case is worldwide by tweeting these messages to the Turkish Ministry of Justice:

[email protected] All those responsible for the death of #AliİsmailKorkmaz should be brought to justice!

[email protected] All those responsible for the death of #AliİsmailKorkmaz should be brought to justice!

2. Join in the photo campaign:

Take a photograph of yourself calling for an end to impunity and justice for Ali Ismail Korkmaz. Photographs which highlight that this is a worldwide campaign (perhaps near a local landmark or a sign for city or university) can be particularly effective. Tweet the image using the hashtags @aforgutu and #AliİsmailKorkmaz.

These images will be used by Amnesty International – Turkey as both part of their internet campaign and will be displayed as part of Amnesty’s vigil at the next session of the trial, which will be held in Kayseri on May 12.