Months before the championship, people from all over the world hoped that by welcoming a global sports competition which promotes integrity and observes uniform regulations, Belarus would finally follow suit and show its citizens and the international community that it can play by the rules. However, it seems that this is not going to be the case. 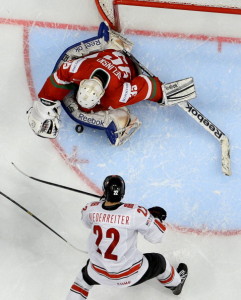 Belarus is hosting the Ice Hockey World Championship this year, but it won’t win any fans until it starts to play by the rules (Photo Credit: Jonathan Nackstrand/AFP/GettyImages).

Three long-term prisoners of conscience are still serving their terms and a new death row prisoner was executed in secret just three weeks before the championship. Moreover, 26 civil society activists have been arrested in Minsk in an attempt to stifle dissent and silence those who may use the championship to highlight human rights concerns in the country. They have been sentenced to various terms of administrative detention from 10 to 25 days.

Amnesty International regards all those detained as prisoners of conscience and is calling for the immediate and unconditional release of those still detained. Many others were forced by the police to live Minsk and some even have fled the country, like Belarusian youth leader Franak Viachorka with whom I spoked on Skype just yesterday.

Ales Bialiatski has served three years of a four-and-a-half year sentence. He was imprisoned because of his human rights activities as Head of the Belarusian Human Rights Centre Viasna. The organization campaigns for the promotion and protection of human rights in Belarus, against the death penalty, torture and other ill-treatment, and on behalf of political prisoners.

Ales was charged with “concealment of income on a large scale” for using his personal bank accounts in Lithuania and Poland to support his organization’s human rights work. For years, the Belarusian authorities have denied registration to the organization, forcing them to operate covertly and with constant harassment. As an “illegal” entity, Human Rights Centre Vyasna was forced to set up bank accounts abroad.

Amnesty International believes Ales Bialiatski did not receive a fair trial. Some of the evidence presented was unauthenticated or anonymous.

Life in prison is tough for Ales. Visits from his wife have been severely restricted, food parcels rarely arrive and he is often isolated from other prisoners.

Last year, while in prison, Ales was awarded the Václav Havel Human Rights Prize in recognition for his work to improve the human rights situation in Belarus.

Mykalai Statkevich is serving six years of hard labor for his involvement in a mass demonstration which took place in late 2010, following the contested presidential elections.

Mykalai had run as an opposition candidate earlier that year. He was sentenced in May 2011 for “organizing mass disturbance.”

In January 2012, he was transferred from a penal colony to a stricter prison regime for allegedly breaking prison rules. According to his wife, Marina, Mykalai has been active while in prison and has been working to improve hygiene conditions across the penitentiary system.

Prison visits are limited to two a year, lasting two hours a time. He is allowed one phone call a month.

Marina recently told Amnesty International how she counts every day her husband has been detained, and now dedicates her days to raising awareness of the repressive situation in Belarus.

Eduard Lobau is a member of Young Front, the largest unregistered opposition youth organization in Belarus. He was arrested in December 2010, a day before the presidential election, and charged with “hooliganism.” He was sentenced to four years of imprisonment.

Eduard was arrested for allegedly assaulting passers-by the day before the elections. Another Young Front activist present at the time told Amnesty International that in fact it was Eduard and his friends that had been attacked.

Amnesty International believes he was arrested to prevent him from taking part in protests expected following the election. He is due to be released in December this year.

A number of international human rights groups started solidarity campaigns urging Belarus to play by the rules. A U.S. Congressman John Shimkus made a floor statement calling on Belarusian authorities for the immediate and unconditional release of all political prisoners. His counterpart Rep. Jim Moran released a video statement.

Belarus won’t win any fans until it starts to play by the rules. Releasing prisoners of conscience and lifting repressive laws would be a good place to start.