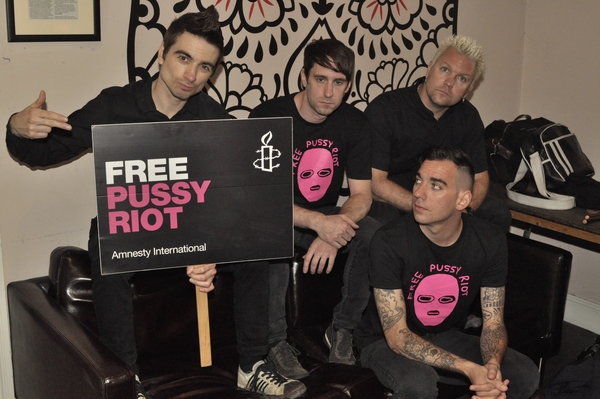 Anti-Flag is one of over one hundred artists who have signed an appeal letter demanding the release of Pussy Riot (Photo Credit: James Nash).

Yesterday, a court in the Russian region of Perm refused to grant parole to Maria “Masha” Alyokhina more than 16 months after she was arrested for a “Punk Prayer” protest with feminist punk group Pussy Riot.

This decision is further confirmation of the authorities’ determination to stifle freedom of expression in Russia. For Masha, it is yet another injustice to add to the growing list that she and fellow Pussy Riot member Nadezdha “Nadya” Tolokonnikova have faced since their February 2012 performance in Moscow’s Christ the Savior Cathedral.

In just two days since the artists' appeal letter was issued, more than 15,000 people from across the globe have signed onto petition.

”
Masha and Nadya should never have been arrested in the first place. Like thousands of other Russians, they were deprived of their freedom for daring to engage peaceful protest. Pussy Riot’s “Punk Prayer” was only one of a number of protests against Vladimir Putin and the Russian authorities in the run-up to Russia’s 2012 presidential elections; from December 2011 to December 2012 alone, at least 5,100 protestors were arrested in more than 220 protest gatherings.

Since President Putin returned to office, the Russian government has clamped down even harder on free expression and assembly, attempting to silence critical voices and curtail the growing protest movement. In the ongoing fallout of the Pussy Riot trial, Putin recently signed into force a law that allows up to three years of imprisonment for “public actions aimed at insulting religious feelings.”

Like yesterday’s court decision, this so-called “Blasphemy Law” may be presented as principled, but at its core it is meant to muzzle free speech. Such legislation is indicative of a troubling trend of bullying critics, in spite of the country’s obligations to defend and promote human rights.

As human rights groups like Amnesty International continue to call on the Russian Government to cease and desist repressive attacks on human rights, activists’ voices are being amplified by some apt champions for free expression. On the eve of Masha’s appeal hearing, more than 100 internationally-renowned musicians called for the immediate release of Maria Alekhina and Nadezhda Tolokonnikova.

World renowned musicians like Adele, Coldplay, Sir Paul McCartney, Madonna and Bruce Springsteen are among the artists standing with the women of Pussy Riot and demanding their release. By joining the call to “Free Pussy Riot,” they are helping to inspire even more engagement and activism.

In just two days since the artists’ appeal letter was issued, more than 15,000 people from across the globe have signed onto petition calling on the Prosecutor General to ensure immediate and unconditional release of Maria and Nadezhda. The number of the signatories continues to grow. The message sent by these united voices is clear – we will not be silenced. When Nadya’s appeal hearing begins tomorrow, we will do everything we can to ensure that the voice of the international community rings out in the courtroom.

Will your voice be heard? Act now to stand in solidarity with Masha and Nadya and defend free expression.

For a full list of musicians who have signed the petition standing in solidarity with Pussy Riot, click here.

4 thoughts on “Fight Back Against Russian Repression with Ke$ha, One Direction and Ozzy Osborne”