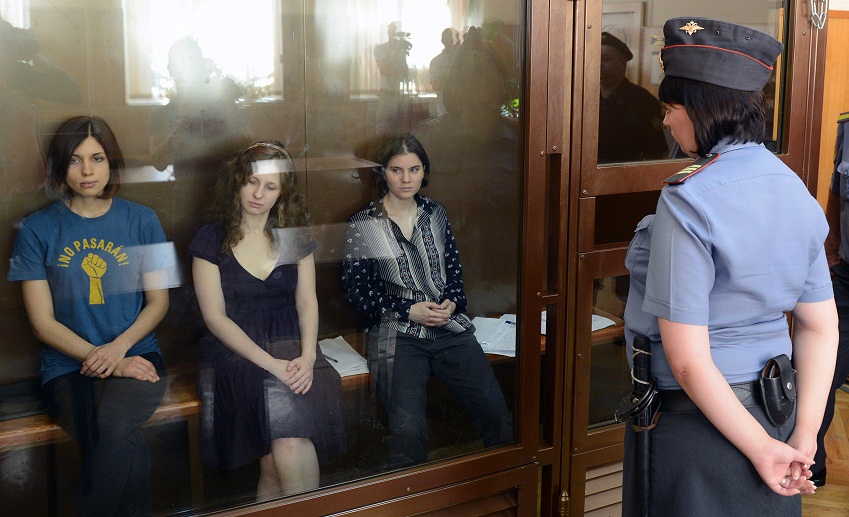 A Russian court’s decision today to sentence members of the punk rock protest band Pussy Riot to 2 years imprisonment in a penal colony is a bitter blow for freedom of expression in Russia – and it sends a dangerous message throughout the world (take action here).

Three members of the all-female group were outrageously charged with “hooliganism on grounds of religious hatred” after they gave a politically charged and impromptu performance – a peaceful performance – poking fun at President Putin at a cathedral in February.

But it doesn’t change the facts: freedom of speech is a human right, and it’s vital to a free and just society.

Because all you can deprive me of is “so-called” freedom. This is the only kind that exists in Russia. But nobody can take away my inner freedom.

These young women will be jailed for 2 years starting from the beginning of their detention in March 2012 and kept from their families, including small children, all because of a peaceful protest song that lasted less than a minute.

Maria Alekhina (Masha), Ekaterina Samutsevich (Katia) and Nadezhda Tolokonnikova (Nadia) are prisoners of conscience – imprisoned solely for the peaceful expression of their beliefs –and should be released immediately.

In the shrinking space for freedom of expression in Russia, the arrest and trial of these women is an attempt by the Russian authorities not only to silence their voices but also to give a clear warning to any others who would dare to criticize the government.

But we won’t be silenced!

Thanks to more than one hundred thousand of you who joined us in speaking out, this international support has done something very important – it shined a bright light on a real injustice, it helped Masha, Katia and Nadia in very difficult times, and it demonstrated to Russian authorities that the world is watching. When Amnesty International sat down with the officials of the Russian Embassy in Washington, DC, it was clear they were feeling the pressure.

It has also galvanized Russians who have never before been politically active.  This quote from Maria Sereda, a colleague of mine on the ground in Moscow, called this the most broad and heated civic discussion Russia has seen in the past 10-15 years:

“This case really made my country think and talk about  religion and state, freedom of  expression, tolerance, law  enforcement system, right to fair trial. And what’s especially important, for the first time in many years people in Russia  could actually see what global solidarity is about… The whole world was supporting our girls and everybody could see it.”

A 2-year sentence is unacceptable – and we will keep fighting until Pussy Riot is free.

Masha, Katia and Nadia might be imprisoned for now, but their courage and their spirit remain undaunted.  In Masha’s own words:

“Because all you can deprive me of is “so-called” freedom. This is the only kind that exists in Russia. But nobody can take away my inner freedom. It lives in the word, it will go on living thanks to openness [glasnost], when this will be read and heard by thousands of people. This freedom goes on living with every person who is not indifferent, who hears us in this country.”

Let’s make sure they keep hearing us. Send your message to Russian authorities now and tell them to Free Pussy Riot!