Amnesty International USA stands with Belgrade Pride organizers exercising their fundamental rights of freedom of expression and assembly. We ask for your expressions of solidarity to support our courageous peers in Serbia as they seek to celebrate a safe, successful, and joyous Pride. 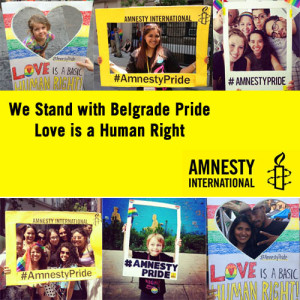 In 2001, LGBT groups staged Serbia’s first Pride parade. Tragically, homophobic mobs attacked the parade and seriously injured many marchers. LGBT advocates again planned Pride celebrations for 2008 and 2009, but municipal and national officials refused to provide adequate security and cancelled both events. In Serbia and beyond, government officials’ failure to support Pride was viewed as an implicit endorsement of the homophobic thugs who threatened the celebration.

In 2010, another Pride Parade was held in Belgrade, but homophobic rioters attacked participants and police officers, injuring dozens of people. After the 2010 parade, national and municipal officials again refused to provide adequate protection for parades in 2011, 2012, and 2013, and effectively conceded public space to the homophobic right. Moreover, these decisions violated Belgrade Pride organizers’ rights of assembly and non-discrimination, which are guaranteed under Serbian law. Even more significantly, they demonstrate the unwillingness of Serbian government officials to protect LGBT persons and groups from discrimination and violence.

Unfortunately, the homophobic intimidation and violence that have tainted recent Belgrade Pride celebrations are all too common throughout Serbian society. Though individual, small-scale acts of violence are sadly commonplace, other homophobic attacks have been more public and high-profile. In 2013, Amnesty condemned an attack against Boban Stojanović, a prominent LGBT rights activist and organizer. Additional Amnesty reports document physical violence perpetrated against LGBT Serbians. Numerous other human rights groups in Serbia also track and work to end anti-LGBT discrimination and violence. I myself provided support to the legal case of a gay man from Serbia who sought and won asylum in the United States after suffering a brutal homophobic attack at home.

Furthermore, although discrimination on the basis of sexual orientation is outlawed in Serbia, these laws often do not translate into real protection for LGBT persons, owing to homophobia among law enforcement and judicial officials. Often homophobic themselves, police officers may personally abuse victims or ignore requests for help with impunity. In short, despite international pressure from domestic advocacy groups and the European Union, Serbian political leaders have not adequately stepped up to guarantee the LGBT community freedom from violence.

In this context, a successful 2014 Belgrade Pride will mark both a symbol of change in Serbia and a hard-fought accomplishment. The celebration had originally been for May 31, at which time it was unclear whether government officials would ensure a safe celebration. But when devastating storms flooded much of Serbia, the organizers postponed Pride, feeling that a public festival would be inappropriate given the nationwide suffering. Organizers and volunteers instead decided that Pride’s message of love and unity would best be served by joining the efforts to help people living in the flood-afflicted areas. It was a beautiful act of solidarity during a time of collective hardship.

Now, with the rescheduled Belgrade Pride nearing, we ask Amnesty members and supporters to deliver their own messages of solidarity to its organizers. Fortunately, we are cautiously optimistic that this year’s Pride will be a triumph. After previous refusals to guarantee the basic rights to freedom of assembly and expression, the government has changed course. Serbia’s Minister for European Integration has publicly supported the event, and most necessary permits have been issued. We allies and supporters from AIUSA look forward to the first Belgrade Pride since 2010, while we continue to call on government officials to ensure that it is held free from violence and intimidation. As preparations for Belgrade Pride 2014 ramp up, act now to express your own solidarity with the festival organizers and Serbia’s LGBT community!