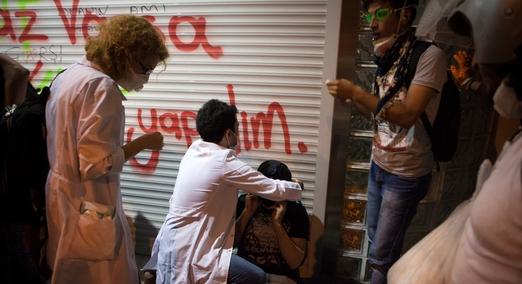 As I write this, there are at least 10,000 people in Taksim Square, all protesting for 10,000 reasons. But here in our office, everything is calm.

We had a makeshift hospital here for two days. We used our desks and tables as beds for injured people, there were sleeping bags on the floor, and medicine and food everywhere. On June 11, we finally had time to clean up the mess and put our desks and computers back.

I first heard about the protests when coming back to Istanbul on May 30. The real police violence started on Friday. It was my day off, and I decided to go to the office at 3 p.m. to respond to those incredible things that were happening.

I tried to take the Metro to the office but it was closed, so I had to walk. I couldn’t take the normal route because tear gas was burning my nose and face. When I got there, a lot of people – including the students who do our face-to-face fundraising in town – were also coming to us.

Biscuits and milk via Twitter
Everyone was anxious and scared. We didn’t know if we were safe. But we decided that people on the streets needed shelter. All public transport had stopped and it was very hard to find a taxi.

The authorities said “don’t demonstrate in Taksim Square”, but where could people go? Istanbul is literally set on two continents, so it’s hard to get home if it’s on the other side, unless you want to swim.

Amnesty staff volunteered to stay in the office, and to use our social media accounts to inform people about how to reach health care and legal information.

We bought a lot of antacid liquid, because mixed with water that calms the effect of tear gas on your skin.

Friends and family started coming. Our office is on the first two floors of a big building on Istanbul’s busiest shopping street, with a garden surrounded by huge walls. The weather was OK, and there was less tear gas in the garden, although it was everywhere.

Everything was closed, but after we posted on social media lots of people started sending us things. Within three hours, we had huge amounts of packed food, milk and basic medicines.

Detained in buses
We didn’t sleep. We had an incredible amount of calls about ill-treatment in detention centers and lack of legal assistance. We gave people the numbers for lawyers who had volunteered to help.

Since we weren’t allowed into the detention centers, three lawyers from the Istanbul Bar Association said they would document the torture or ill-treatment claims for us. They documented as many as 60 people being detained in buses made for 40 people. Many needed medical treatment but were kept there without water and food for hours.

A volunteer lawyer and an Amnesty campaigner put on face masks and went out to find water. They found an open shop and bought all the water they had. The shop seller only charged us half price, and also found some food. They found a taxi, took it all to the Istanbul central police headquarters and delivered it to detainees who had been without for three hours.

A hospital in the office
On Saturday morning, everywhere was still full of tear gas. Then the Turkish Medical Association (TMA) said they needed a third makeshift hospital. They sent over more than 20 volunteer medical students, who explained how to look after people and how to arrange the office.

A family with a 5-year-old child came to us, shocked and terrified. They didn’t have anything to do with the protests. The father was a cleaner in an office around Taksim Square. He had taken his family with him thinking the office would be safe. But it was closed and they were out on the streets without gas masks. They started to run and the child started crying.

Tear gas feels like you are burning, like you are on fire. Our volunteers gave the little girl first aid, biscuits and orange juice. She cried for at least 40 minutes. But we had colored pens and paper, and she watched cartoons on YouTube. So social media really does work! When it was calmer they were able to leave.

Burning down tents
Things were quiet, until May 28 at 5 a.m., when the police raided a small tent camp in the corner of Gezi Park. They burned their tents down and threw tear gas at them. At 5 a.m.! They were sleeping in their tents, not protesting!

After that raid, the protests just grew and grew. But we didn’t think they would last 17 days. Friday and Saturday were the worst days in Taksim area, where our office is located. We saw hundreds of policemen outside our windows and we were scared that they would see that we were running a makeshift hospital. But of course we would also have welcomed injured policemen.

When I went to the pharmacy a young man was lying on the ground in front of it, hurt and bleeding. People with white doctor’s uniforms surrounded him. Then the police fired tear gas directly at us all. I started running and I still don’t know what happened to those people. I feel guilty, but it was instinct. We all have similar stories.

A friend of mine from college called saying a tear gas canister had just crashed through her neighbors’ window, while she was just sitting in her living room. The police fired them indiscriminately. She cried for hours, and we helped her find a lawyer.

And in a mosque that was also a makeshift hospital, where people had broken arms and legs, medics couldn’t get in and out because the police were gassing the entrance.

A tough decision
In total, about 100 people were treated in our office, mostly for the effects of tear gas and little cuts. We sent on people who had broken arms and legs from being hit by police batons after falling down from the tear gas.

We are still working on our Twitter action and petition, and getting requests for legal aid. I have so far spoken to media from 15 different counties, including China.

It was a tough decision to be responsible for everyone’s health and safety in the office. But I’m a human rights activist, and people needed a safe place to go.

You can also follow the following Amnesty staff on Twitter for live updates of the situation on the ground: @muratcekic, @pilkiz and @andrewegardner.

13 thoughts on “A Hospital in Amnesty’s Office: Director of Amnesty International Turkey on a Sleepless Week in Istanbul”