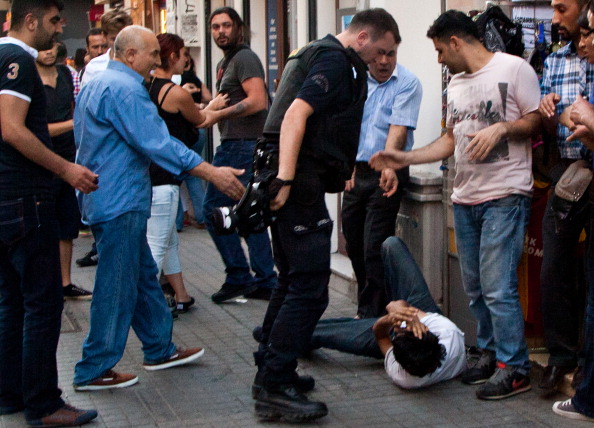 A Turkish police officer beats a demonstrator as people try to stop him during a protest near the entrance of Taksim Square in Istanbul (Photo Credit: Gurcan Ozturk/AFP/Getty Images).

The saying is almost the same in Turkish, I didn’t know whether to laugh or cry.  On June 29, the New York Times published an op-ed by Turkish EU Minister, Egemen Bağış, in which he defended Turkey by arguing that the Gezi protests were evidence of Turkey’s mature democracy, describing protestors as a manifestation of a “vibrant civil society.”  As noted in a brilliant take-down by my colleague at Amnesty USA, Bill Jones, this is the same Bağış who a few short weeks earlier had warned, at the height of the protests:

From now on, the state will unfortunately have to consider everyone who remains there a supporter or member of a terror organization…

Our prime minister has already assured [activists] about their aim with the protests. The protests from now on will play into the hands of some separatist organizations that want to break the peace and prioritize vandalism and terrorism.

Jones notes that Bağış’s defense comes as Turkish authorities work to cement their control over almost every aspect of public discourse, while punishing any who dare stand in their way.

Bagis’ declaration looks to be part of a campaign by the Turkish government to change the public memory of what happened at Taksim Square, as well as to make sure that laws are tightened to make further demonstrations illegal. Political slogans are now banned from soccer matches (looking forward to them trying to enforce that!); Erdogan has called upon supporters to file complaints against neighbors who bang pots and pans in support of the demonstrators; and, for good measure, the police are going to install “tip boxes” in neighborhoods so that anyone who sees behavior believed to be illegal can anonymously notify the police.

In previous posts, we noted the punishment dealt out to reporters and publishers who dared to cover the demonstrations. Those who gave support to the demonstrators have not fared any better. Koc Holding, one of Turkey’s largest industrial holding companies and owner of a hotel in Istanbul that offered refuge to people fleeing tear gas attacks in Taksim Square, has suddenly had nine of its provincial offices raided and its computers and financial records seized for a tax audit.

Turkish authorities have banned political slogans at soccer matches and stormed student dormitories seeking students who participated in the protests. It has sought to punish health workers who cared for the injured while journalists come under increased pressure to only report “news” that is supportive of the ruling party. Attempts to stage protests in Taksim still risk police violence.

The family of a child injured in the protests hoped to make a public declaration in Taksim Square. They were prevented from doing so and the hundreds who gathered there to protest police violence were themselves pushed out by police who used truncheons, water cannon, and and tear gas to disperse peaceful protestors.

How You Can Help

All of this is to say that, despite the fact that international attention as now moved elsewhere, the human rights situation in Turkey remains extremely grave. There are things you can do today to help.

1. If you have not done so already, please consider contributing to our letter campaign.  It will only take a minute of your time.

2. Amnesty International Turkey has developed an amazing web application that will allow you to “virtually” take a stand in Taksim for freedom of expression and assembly. Add your name and share it on social media.

3. Stay informed by following our work on Facebook or on the Amnesty USA’s Human Rights in Turkey page. We’ll keep you up to date about events and actions!

Social media is a powerful force for social change if you ensure your voice is heard. Minister Bağışhad his say in the New York Times. It is time to make our voices heard too!