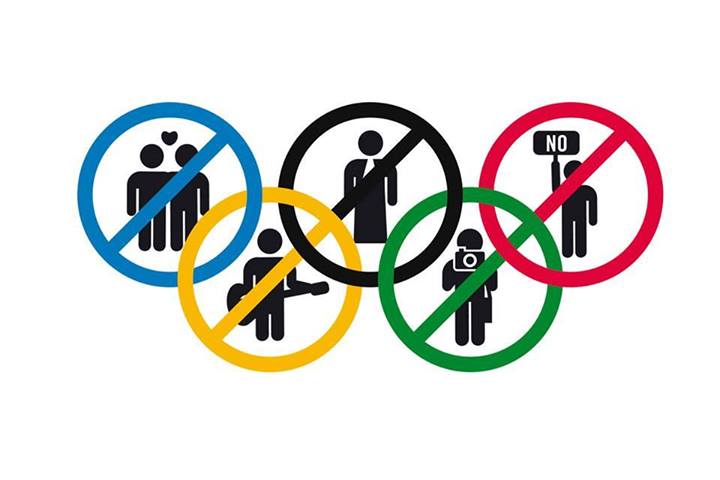 1. Keeping Prominent Figures Behind Bars & Intimidating Human Rights Defenders: Prominent opposition voices such as  Platon Lebedev are still behind bars, even after the amnesty law passed in late 2013. Defenders complaining about law enforcement misconduct have themselves been targeted, subject to harassment, death threats, enforced disappearances and murder. Sapiyat Magomedova, a lawyer operating in the North Caucasus, is just one of many facing intimidation just for trying to do her job. Lawyers have a vital role to play in representing victims of human rights abuses and ensuring fair trials for those accused of involvement in armed groups, or other criminal activity. However, those lawyers who confront the circle of injustice in the North Caucasus often come under threat themselves.

2. Stifling Artistic Freedom: Although the imprisoned members of Pussy Riot have been freed, their songs and video clips were scrubbed from the Russian internet after a Moscow court declared the materials “extremist.” The Moscow Mayor’s Office prohibited the Russian premiere of the film Pussy Riot: A Punk Prayer and forbade discussion with Pussy Riot members in one of Moscow’s theaters. In late August 2013, the Muzey Vlasti (Museum of Power) was shut down after police seized a painting of Russian President Vladimir Putin and Prime Minister Dmitry Medvedev in women’s underwear, saying the satirical display had broken unspecified laws. Other paintings ridiculing politicians, both past and present, were seized, too. There were several other incidents across Russia in which art exhibitions found to be controversial by the local authorities were prohibited.

3. Restricting Non-Governmental Organizations (NGOs): NGOs that participate in ‘political activities’ and receive funding from overseas must now register as ‘foreign agents’ and comply with onerous new regulations designed to cripple their operations.

4. Criminalizing Protest: Although the Constitution of the Russian Federation guarantees the right to peaceful assembly, changes to the federal law on assemblies have significantly increased sanctions for peaceful rallies, meetings, demonstrations and marches. Most prominently, police used excessive force against protesters during the Bolotnaya Square protest on May 6, 2012. Hundreds of peaceful protesters were arrested and 28 individuals have faced criminal charges. Seven of the Bolotnaya protesters are prisoners of conscience, including peaceful protester Mikhail Kosenko, who was confined to a mental institution for forcible psychiatric treatment in a ruling reminiscent of  Soviet-era practices used to silence dissent.

5. Expanding the Definition of Treason: Russia’s new Criminal Code expands the definition of ‘treason’ to such an extent that virtually any government critic could be considered a “traitor.”

6. Restricting public expressions of LGBTI rights and identity: New laws curtail efforts by lesbian, gay, bisexual transgender and intersex (LGBTI) individuals and supporters of LGBTI rights to fight for equal rights. On June 29, 2013, 55 LGBTI activists were arrested for attempting to hold a peaceful demonstration. Local authorities said the demonstration violated a ban on “propaganda of homosexuality.” This in turn has created a climate of intolerance and promoted violence by vigilante groups, which the authorities have failed to prosecute.

Send a message to President Putin now telling him to end the crackdown on human rights.