Turkish Prime Minister Tayyip Erdogan has sent mixed messages in response to the tragedy. Cancelling a scheduled trip to Albania, he has called for three days of national mourning and promised an investigation.

Later, as criticism of the government became more pointed, he moved to the defensive, arguing that “explosions like this in these mines happen all the time. It’s not like these don’t happen elsewhere in the world.”

In other words, Erdogan is suggesting that the mining accident in Soma  this week is just “one of those things,” an accident which – however tragic – was unforeseeable and unavoidable. In fact, however, the mining disaster and the government’s response in the hours since give at least three major causes for concern. 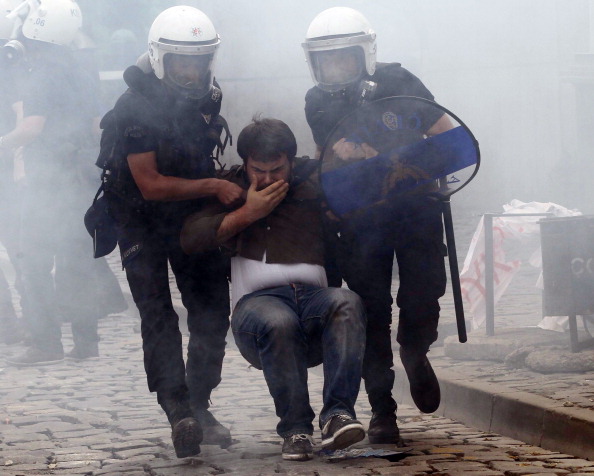 Turkish police arrest a protester during a demonstration after more than 200 people were killed in an explosion at a mine (Photo Credit: Adem Altan/AFP/Getty Images).

1. Turkey’s poor record of industrial safety. Turkey has enjoyed remarkable economic growth under the AKP. Unfortunately, this growth has come with significant costs.  Economic inequity has grown. Meanwhile, Turkey’s record for industrial safety – never strong – seems to have worsened.  Of the 3000 miners who have died in Turkish mines since 1941, more than a third have died since 2002, when the AKP came to power. As noted in Reuters article on the disaster:

The ILO in 2012 said Turkey had the highest rate of worker deaths in Europe and the world’s third-highest. In the mining sector, 61 people died in 2012, according to the ILO’s latest statistics. Between 2002 and 2012, the death toll at Turkish mines totaled more than 1,000.

2. Government’s apparent failure at oversight. According to the Turkish government, the mine has been subject to regular inspections, including multiple inspections in the past two years, the most recent in March. At the same time, as reported in the Wall Street Journal, there have been very public questions about the mine’s safety record:

Following a series of accidents and deaths last year in the same Soma region where Tuesday’s accident occurred, Ozgur Ozel, a lawmaker who represents the region with the main opposition Republican People’s Party, in October submitted a proposal to investigate the incidents and identify those responsible. The measure was defeated by the governing Justice and Development Party in the Ankara parliament on April 29.

This was a tragedy that should have been avoided. The long history of deaths in mines in Turkey raises chilling questions over workers’ safety. The fact that the government rejected recent calls by parliamentarians to investigate serious work-related accidents is nothing short of shocking.

3. Police suppression of peaceful protests. Protests have broken out in a number of cities in Turkey in the aftermath of this disaster. And, once again, these protests are met with water cannon, tear gas, and truncheon.

Indeed, as I write this blog, I have been chatting with Gardner over Skype. He reports from Amnesty’s office in Istanbul that the streets below are heavy with tear gas and that he has seen police and water cannon trucks chasing demonstrators. He witnessed a man shot at close range with a plastic bullet directly in front of the office, apparently for “shouting.”

Amnesty calls on the Turkish government to urgently investigate the catastrophic coal mine explosion and reports of dangerous working practices in the mining sector. Moreover, once again, Amnesty calls on Turkish officials to respect its citizens’ basic human rights to freedom of expression and assembly.