In countries afflicted by war, girls are kept from attending school for a variety of reasons. The insecurity associated with armed conflict may keep parents from sending their children to schools and make it difficult for school officials to protect children. Some fear daughters will be seized by armed groups or injured or killed on their journey to/from school or when schools are under attack. Girls living in refugee or displaced persons’ camps are at particularly high risk of sexual abuse and exploitation. Moreover, the psychological trauma, fear, and stress caused by attacks or fear of attacks hinder learning and teaching, affecting motivation and attendance of both staff and students. When it comes to children displaced by war, the barriers to education only increase. The UN Refugee Agency reports that only 50% of all refugee children are enrolled in primary school; approximately 25% are enrolled in secondary school; and just 1% is enrolled in tertiary education. And refugee girls face a significant disadvantage when it comes to access to education. For those refugee girls that are able to access schooling, it is estimated that they complete on average just 3 years of education.

This is the reality for refugees around the world, like those from Syria, where the conflict in Syria has produced the largest international refugee crisis in nearly 25 years. UNHCR now lists the number of refugees fleeing the country at more than 4 million, with most arriving to camps in Lebanon, Jordan, and Turkey. Millions more Syrians are internally displaced. In 2000, Syria could boast universal primary enrollment; by 2013, 1.8 million children were out of school. 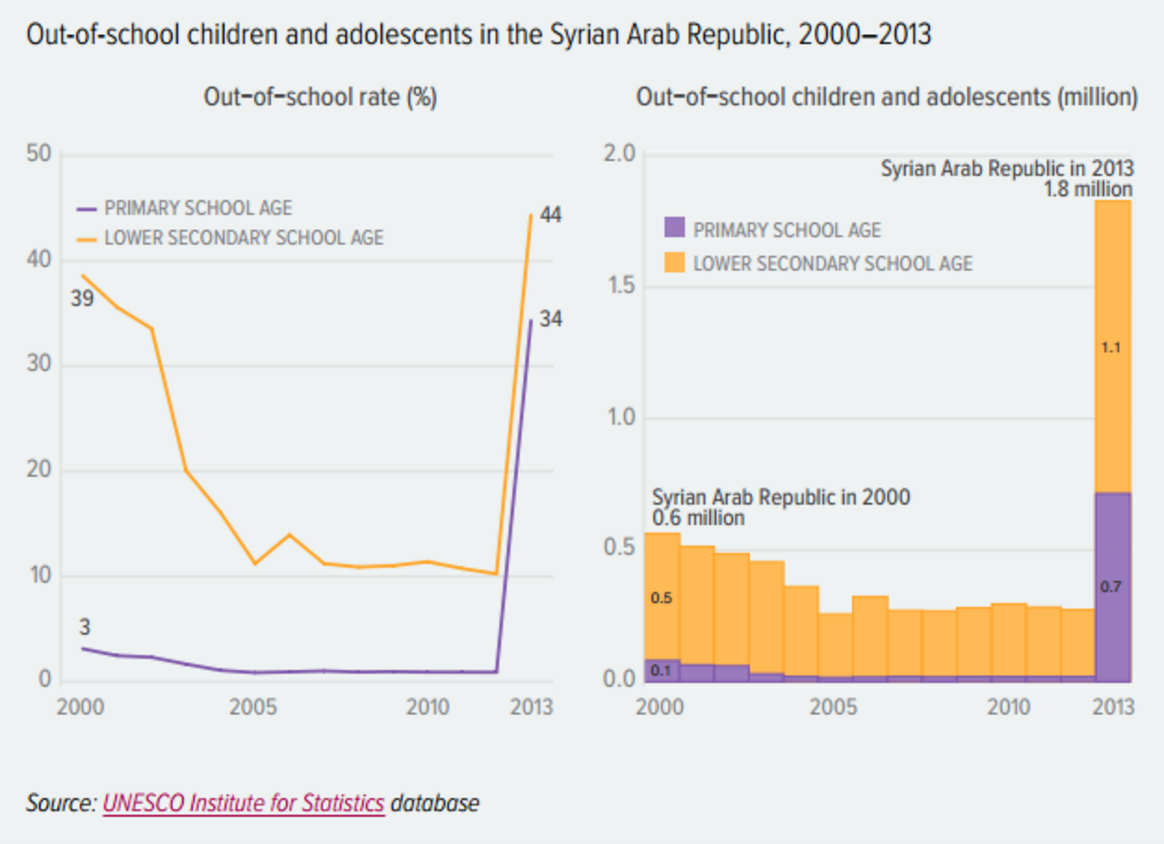 Within refugee camps, an education can often be hard to come by. In May 2015 Lebanon registered nearly 1.2 million Syrian refugees with an estimated 90% of the refugee children of primary and lower secondary school age out of school in 2013.

Where refugee parents struggle to feed their children, education often loses priority. In camps, some refugee parents find themselves legally prohibited from attaining employment and therefore resort to desperate measures. This includes the increase of child labor, and for girls in particular, child marriage. A 2014 UNICEF study on early marriages reports that one third of registered marriages among Syrians in Jordan involve children.

“When we came to Lebanon [as refugees…], my children couldn’t continue their education … At first my daughter, son, and I were living with my brother and his family. My 16-year-old daughter had to get married because we were under pressure. I didn’t approve of this but circumstances pressured us – economically, financially, and psychologically.” – Nour (not real name) is 40 years old and is from southern Syria. She now lives in the Bekaa Valley region of Lebanon.

Access to a safe and quality education is a fundamental right of all children. For girls in conflict-affected environments, education can offer a sense of normalcy and hope in a time otherwise rife with chaos and uncertainty. It can offer a chance of a better life and open up opportunities in addition to instilling self-confidence. It can also offer an alternative to child marriage and child labor and can reduce the risk of other human rights abuses, including child recruitment into armed groups and sexual violence.

Much has been done by non-governmental organizations and UN agencies worldwide to address gender parity and access to education for the most vulnerable, but at present we face the very real prospect that most out-of-school children will not enter/return to school, including nearly an entire generation of Syrian children, particularly Syrian girls.

Across the world, Amnesty activists are calling on their governments to do more to protect and resettle refugees. Take action and demand the United States stop refugee bashing and do more to resettle and support refugees. The education—and lives—of refugee children are at stake.

This blog post is a part of 16 Days of Activism Against Gender-based Violence: “From Peace in the Home to Peace in the World: Make Education Safe for All!”