Earlier this week, scores of Women of Zimbabwe Arise (WOZA) members were arrested and detained by riot police during a march in Bulawayo, including National Coordinator Magadonga Mahlangu. All were eventually released without charge, but the efforts of police to harass and intimidate serve as a reminder of the challenges to practicing freedom of expression and assembly in Zimbabwe.

WOZA members have been conducting a series of protests demanding the draft constitution process be completed and brought to a vote. Currently Zimbabwe does not actually have a constitution. It has operated for 30 years under the Lancaster House agreement, which governed the transition from UK colonial power to self-government.

It has been modified multiple times, but following the political violence of the 2008 elections and the subsequently negotiated Government of National Unity (GNU), it is mandated that a new constitution be drafted and voted on through a referendum process. This process has been delayed multiple times and many civil society organizations in Zimbabwe express concern the process has been politicized and does not adequately reflect rights and government structures desired by Zimbabwean citizens. 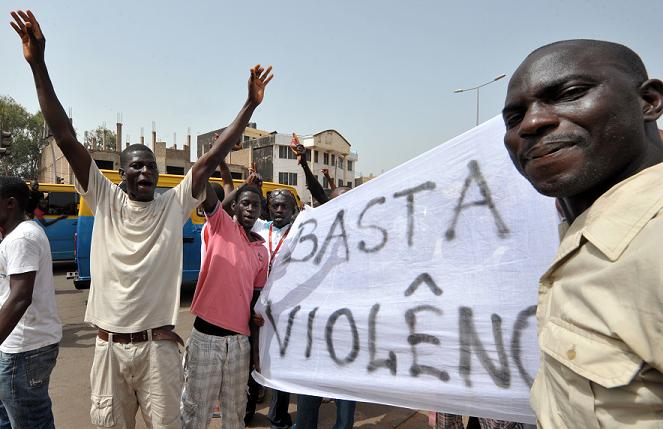 END_OF_DOCUMENT_TOKEN_TO_BE_REPLACED

Every year on March 8th we celebrate International Women’s Day. I have been blessed to know many amazing women in my life: my mom, my sisters, my aunts, my friends. It’s nice there is a day of the year set aside to honor and remember strong, powerful women who make a difference in our world.

Ginetta Sagan was one of those women. Ms. Sagan, once a political prisoner herself, was a fearless and outspoken human rights defender who tirelessly worked to improve the lives of others. Amnesty International USA established a fund in her honor which annually recognizes a woman who, often at great personal risk, dedicates her life to improving the lives of others.

END_OF_DOCUMENT_TOKEN_TO_BE_REPLACED

Yesterday, the activists of Women of Zimbabwe Arise (WOZA) took to the streets in Bulawayo for the 10th consecutive commemoration of Valentine’s Day. Yes, I know it’s a week early; but in Zimbabwe, when you’re trying to keep the riot police from guessing when your peaceful protests will occur, that’s what you have to do. Unfortunately, their plan didn’t work and co-founder Jenni Williams, along with twelve other people including a pregnant woman and minor, were arrested.

WOZA and MOZA (Men of Zimbabwe Arise) use the occasion of Valentine’s Day to confront governmental policies that violate civil and human rights in Zimbabwe and educate their fellow citizens about issues and what can be done. Frequently, WOZA is met with brutal violence at the hands of the riot police. Jenni has been arrested nearly 50 times.

END_OF_DOCUMENT_TOKEN_TO_BE_REPLACED

As Amnesty’s annual Write for Rights campaign come to a close, I wanted to give a shout out to my friends at Women of Zimbabwe Arise (WOZA). They are featured in this year’s event that culminates on International Human Rights Day, December 10th.

Their inclusion this year is especially poignant as WOZA activists Jenni Williams and Magodonga Mahlangu will be in court December 12th, facing charges with potentially serious consequences.

END_OF_DOCUMENT_TOKEN_TO_BE_REPLACED

Only three months after 18 were killed during peaceful protests in Malawi, five activists were arrested last week. They were holding a peaceful demonstration calling on President wa Mutharika to have a referendum for early elections, the resignation of Police Inspector General Peter Mukhita, and an investigation into his alleged involvement in the death of student activist Robert Chasowa.

Though Malawi rarely receives significant international press coverage for human rights abuses, or much other news for that matter, the government in Malawi has been systematically restricting human rights and taking violent action to suppress criticism.

END_OF_DOCUMENT_TOKEN_TO_BE_REPLACED

On Wednesday, September 21, activists from Women of Zimbabwe Arise (WOZA) marched in Bulawayo, Zimbabwe to commemorate International Day of Peace. Not seeming to appreciate the irony, police officers violently dispersed the protest, arresting 12 women and injuring several others.

Thursday, 10 of those women were released, but Jenni Williams and Magodonga Mahlongu remain in jail. They are charged with kidnapping and theft pertaining to some sort of bizarre set of circumstances that is beyond my comprehension at this time.

Jenni and Magodonga appeared in court this morning. Bail was denied and their next hearing is scheduled for October 6th. They will remain imprisoned until that time. Jenni recently had a minor operation which could result in serious complications from infection due to the disgusting sanitary conditions in prison. This ridiculous set of circumstances is a direct reflection of elements of the Zimbabwe government attempting to repress political and social dissent.

END_OF_DOCUMENT_TOKEN_TO_BE_REPLACED

Labor unions in Swaziland called off a third day of protests after police harassment and arbitrary arrests caused them to fear for the lives of demonstrators. Police used excessive force to disperse protests including firing tear gas, rubber bullets and water cannons into crowds.

On April 11, four key activists were arrested ahead of the announced protests. Those detained were officials from the Swaziland National Union of Students (SNUS), the banned youth organization SWAYOCO and an organizer for the Swaziland United Democratic Front (SUDF). They were released on April 13, and placed under unlawful house arrest.

Mary da Silva, a lawyer and coordinator of the Swaziland Democracy Campaign, was arrested and seized while giving an interview to a journalist. “Some people were taken away in big trucks, and they were dumped way out in the bush where there is no transportation,” said Ms. da Silva. “Basically, what they are doing is kidnapping activists.”