Dr. Mohamed al-Mansoori is among those detained for political dissent in the UAE (Photo Credit: Karim Sahib/AFP/Getty Images).

There’s an anniversary this week in the United Arab Emirates (UAE) that its government wants the world to ignore.

The country has the reputation as being the “welcoming and open” Middle Eastern country, and the government works hard to burnish that image around the world. UAE political reformers know better, and a year ago, a trial of 94 government critics exposed the reality that dissent is muzzled and political freedom severely limited.
END_OF_DOCUMENT_TOKEN_TO_BE_REPLACED 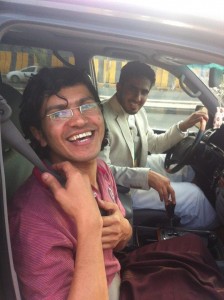 After close to three years in detention and following international and domestic pressure, on July 23, investigative journalist Abdul Ilah Haydar Shayi’ has been set free.

Shayi’ was featured in the recent documentary Dirty Wars, a powerful film co-written and co-produced by Jeremy Scahill, about the U.S. government’s “global war” paradigm used to side-line international human rights law from U.S. counter-terrorism efforts around the world.

Abdul was targeted by both the Yemeni and American governments for telling the truth. He was the first Yemeni journalist to allege U.S. involvement in the missile attack on the community of al-Ma’jalah.

Yemen’s government initially said its forces had acted alone in the attack on al-Ma’jalah – which killed 41 local residents, including 21 children and 14 women. But shortly afterwards, American media outlets published statements by anonymous U.S. government sources claiming President Obama approved the use of U.S. missiles being fired at two alleged al-Qa’ida sites in Yemen.

In June 2010, Amnesty International released images of a U.S.-manufactured Tomahawk cruise missile that carried cluster sub-munitions, apparently taken near al-Ma’jalah after the December 2009 airstrike. The organization further claimed that such missiles were only known to be held by the U.S. forces at that time and that Yemeni armed forces were unlikely to be capable of using such a missile.

END_OF_DOCUMENT_TOKEN_TO_BE_REPLACED

Women have played a big role in the Yemen protests, a fact the Nobel committee recognized when it awarded the 2011 Nobel Peace Prize to Yemeni activist Tawakkol Karman, one of three women to jointly receive the award last October.

Yet, despite their contributions, Yemen’s women activists have been harassed, arrested, and in some cases beaten for their participation in protests. Some have also been threatened through their families, with male relatives ordered to control and curtail their activism.

As Yemen enters a delicate transition phase toward democracy, the government must address longstanding violations of women’s human right. Women in Yemen face systemic discrimination and pervasive violence. Their rights are routinely violated because Yemeni laws, as well as tribal and customary practices, treat women as second-class citizens. Women face discrimination in matters of marriage, divorce, inheritance, and child custody, and the state fails to take adequate measures to prevent, investigate, and punish domestic violence.

END_OF_DOCUMENT_TOKEN_TO_BE_REPLACED

After many months of back and forth negotiations, last week President Ali Abdullah Saleh, finally singed the Gulf Cooperation Council (GCC) agreement for a power-transfer. Even though the details of the full agreement have not been made public, it is widely believed that the agreement offers the president and some others government officials immunity from criminal investigation and prosecution.

END_OF_DOCUMENT_TOKEN_TO_BE_REPLACED

Women in Yemen are fighting on two fronts. They are on the frontlines speaking up against torture, rampant poverty, corruption and lack of freedom; but they also fight on a different front. Women must fight gender-based discrimination in social arenas such as education and employment.

In 2007 when activists and journalists started being harassed and intimidated, the Women Journalists Without Chains started organizing sit-ins every Tuesday. Later on the sit-ins took on a wider scope, allowing anyone with a human rights concern to participate.

One of the organizers was Tawakkol Karman, president of Women Journalist Without Chains. She and others later joined wider protests in Sana’a asking for President Ali Saleh to step down. Tawakkol among others was arrested on January 23rd 2011 for participating in “unlicensed protest”. She was released a day later. Two days later her brother received a phone call implying that she would be killed if he did not ensure that she stay at home. This threat did not stop her.

She told Amnesty International that “I shall continue; I chose this road and at the end of the day it is a matter of sacrifice. People are peacefully protesting and they are facing repression.” Tawakkol is a member of the Shoura council of the Islah party.

END_OF_DOCUMENT_TOKEN_TO_BE_REPLACED

As most of the news have been focused on Libya, the violence by the security forces in Yemen have been intensified. On Friday a coordinated sniper attack on the anti-government protesters in Sana’a resulted in at least 40 people dead and more than 200 wounded. All the reports indicate that the sniper attack by the security forces was a deliberate shooting to kill protesters. Most likely the death tool will rise, since many of the protesters were shot in the head, chest and neck.

On Saturday, according to the news reports, police attacked protesters in Southern city of Aden resulted in wounding several of the protesters.

As protest to the escalation of violence, four cabinet ministers, including minister of human rights as well as the Yemen’s ambassador to the UN have resigned.

On Friday President Saleh declared a nationwide state of emergency and on Sunday he dismissed his cabinet amid continuing protests against his government.

Amnesty called such attacks deplorable and has called the Yemeni authorities to investigate and bring to justice those who ordered and carried such attacks.

The international community and the US must put pressure on the Yemeni leadership to take action to stop such attacks which causing increase in civilian death.

More groups are joining demonstrators across Yemen asking for the president Ali Abdullah Saleh to step down. In addition to young people now tribesmen and others are joining anti-government demonstrators in various cities in Yemen.

President Saleh has called for security forces to give full protection to demonstrators.

In Sana’a instead of Tahrir Square, which was the gathering place for the government supporters, the anti-government demonstrators have been gathering in front of Sana’a university.

On Friday the anti-government demonstration in front of the Sana’a university, one of the largest gatherings so far, was different from last Friday, in part due to large number of people.

In Aden, the situation was more tense and according to Aljazeera news five people were killed.

In an unconfirmed report several people have been arrested in Aden.

Government must be serious in protecting the protestors and ensure that those injured have access to medical treatment.

At least 10 people have been killed during peaceful demonstrations in various cities in Yemen over the past three weeks. In Taiz on Friday a grenade was thrown at the protestors, injuring 78 people according to a Yemeni human rights organization.

On Sunday thousands of people have started sit-ins in several cities including, Sana’a Aden, Taiz and Ibb calling on President Ali Abuddlah Saleh to step down.

Tribal leasers have been announcing support for President Saleh or protestors, which with continuation of violence could be very dangerous, considering that Yemen has the second highest rate of per capita gun ownership, after the US.

Among people who have been arrested on Sunday, were Southern Movement opposition leader Hassan Baoum who was arrested from a hospital in Aden which he was receiving treatment.

On Friday one of the activist in Sana’a told Amnesty international “… security blocked every corner, then allowed the thugs to enter, people had no where to run… while running we came across two very young girls around the age of 7 or 8 who were selling books but got caught in the crowd. We took them into the house with us, but then the security wanted to enter.  We informed the security that we have children and a woman with us but instead of protecting us, they called the thugs to come in and attack us but the doors were locked.  We tried to go up on the roof, and then wanted to run down to the other side, but thugs saw us and started throwing rocks at us. Me and one of the girls got hit by a rock but very mildly, the girls were terrified”.

Yemen's demonstrations have been inspired by protest in Tunisia and Egypt, private

Demonstrations in Yemen continued for the third week. But in the last week the peaceful protests and call for political reform turned violent.

Demonstrations in Aden is not new, since 2007 protests have been taking place in south of Yemen against discrimination by the government against Southerners.  But the level of violence and firing at peaceful demonstrators in recent weeks is new.