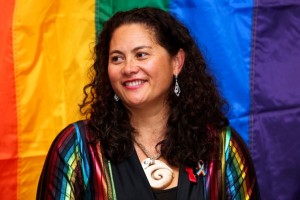 As my transition progressed and the documentation and clinical issues were addressed – passport, name change, drivers license, hormone therapy and testosterone blockers, surgery, etc. – it became apparent that, to change my birth certificate and complete the process of transition, something would have to give. I had either to remain legally a man when to all intents and purposes, I was living 24/7 as a woman or my spouse and I would have to divorce so that I could obtain Family Court approval to change my birth certificate and leap the final ditch to womanhood.

It’s a choice I did not want to make but, in saying that, there was never any doubt as to what course of action I would take as my marriage and my family are central to my life and more important than anything else.

My final action as a functioning male was to become the co-parent of a beautiful son, now age 10.

For thirteen years, we have lived this anomalous life: my spouse, a lesbian woman, married to a whakawahine woman, who must remain legally a man or divorce to complete the paperwork, and a son with a Mum and a Mumsie, which is what our wee man has chosen to call me.

It’s a good life, a sweet life, but it’s not yet complete.

Then, out of the blue, came Louisa Wall and her Marriage (Equality) Amendment Bill which, if passed, will tidy up all the anomalies for us and enable other same sex couples who wish to marry to do so. I will be able to apply to the court to have my birth certificate amended to read ‘female’ instead of ‘male’ without the trauma of first obtaining a divorce, my spouse can have her relationship with a woman legitimized and our son, who has never had an issue with having two Mums, can feel that his family is complete.

I can’t see how my spouse and I being married to each other affects anyone else. It’s our marriage, after all. End of story.

If I’m sad about anything it’s the way many churches have responded to the bill and the vicious rhetoric that has surrounded this opposition.

For me, marriage isn’t about God or the Bible or anybody other than my spouse and myself. It’s about our commitment to love each other, our commitment to care for each other and it centers on our devotion to the family we have created which, when it’s all said and done, is just like any other family. A civil union just doesn’t do it for us. It never has. It’s always been marriage or nothing.

I’m grateful to Louisa, to the parliament and to all those people who have supported the passage of this Bill. I respect those who have opposed the legislation because I know that many are sincere in their beliefs and I hope that they can find it in their hearts to accept the decision of the parliament and to join with us in celebrating this small step towards an even more fully inclusive society.