And yet, no one from the U.S. government has even acknowledged the killing, let alone explained why it occurred, apologized or given the family justice or compensation.

The United States claims that its drone strikes are extremely accurate, based on vetted intelligence and that the vast majority of those killed have been linked to al Qaeda and its allies. Yet the world has to take this on faith, since the U.S. administration refuses to disclose key facts, such as details of who is targeted and on what basis. While the Taliban, al Qaeda and other armed groups operate in northwestern Pakistan, it is impossible to fathom how a woman in her 60s surrounded by her grandchildren could be mistaken for a fighter. 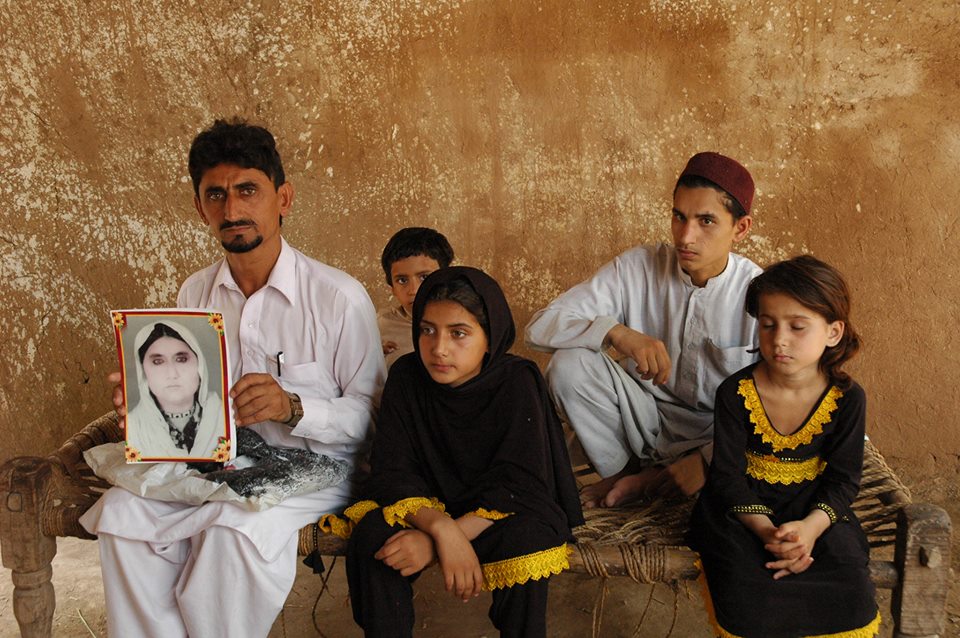 Mamana Bibi’s son Rafi qul Rehman (left) and his children Safdar (back), Nabeela, Zubair and Asma. They have yet to receive any acknowledgement that a U.S. drone strike killed her, let alone justice or compensation for her death.

The U.S. drone program has quickly turned into a defining human rights issue for our era. On Tuesday, Amnesty International launched “Will I Be Next?”: a major report on drone strikes in Pakistan. It is one of the most comprehensive studies ever conducted on this topic from a human rights perspective, based on painstaking research in a dangerous, complex and highly politicized environment.

Amnesty International examined the reported 45 U.S. drone strikes in North Waziristan, the region in Pakistan’s northwestern tribal areas that has seen the most strikes, between January 2012 and August 2013. We conducted detailed field research into nine strikes through interviews with survivors, eyewitnesses, residents and officials, corroborated against satellite imagery, along with video, photographic and audio evidence obtained from strike locations.

The secrecy has to end - the facts and legal basis for drone strikes has to be made public, including what rules are in place to protect civilians.

”
Based on all this, it is evident that the drones offer a special kind of misery for people in the tribal areas who live in constant fear of death from the skies. As one local told me: “The fear of drone attacks always exist in the mind of the local people. How can we know that a drone missile may not hit our houses? It can hit anywhere.”

Our research raises serious concerns that the United States may be carrying out unlawful killings in Pakistan, and there is an argument to be made that the attacks could even amount to war crimes or extrajudicial executions. Our report therefore calls for the United States to open up the secretive drone program to public scrutiny and to ensure independent and impartial investigations into strikes that may constitute unlawful killings.

The reality is that the United States still carries out its so-called targeted killings program in near total secrecy. Successive promises by President Barack Obama and other senior U.S. officials to increase transparency have effectively amounted to a “trust us” approach while the administration continues to withhold basic facts about drone killings and their lawfulness.

North Waziristan and the rest of the tribal areas are neglected and under-developed, and their residents do not enjoy the same human rights protections as the rest of Pakistan. Abuses by the Pakistani military and insurgent groups like the Taliban and al Qaeda are common.

What struck me during our research for this report was the frequency and range of violence endured by people there. Just a few months before I interviewed Mamana Bibi’s family, for example, they were forced to flee their home because the Pakistani military indiscriminately shelled their village in response to a suspected Taliban attack on a nearby checkpoint. Others I interviewed reported receiving threats from unknown men shortly afterwards, possibly by local intelligence services, or fighter groups who have killed dozens of people they suspect of spying for the United States or Pakistan.

While the Pakistani government publicly opposes the U.S. drone program, Amnesty International is concerned that some officials and institutions in Pakistan and in other countries including Australia, Germany and the United Kingdom are assisting the United States to carry out drone strikes that constitute human rights violations.

But the United States and countries assisting its drone program cannot continue to shirk their responsibilities under international law. The secrecy has to end – the facts and legal basis for drone strikes has to be made public, including what rules are in place to protect civilians. And there must be thorough, independent, impartial investigations into all drone strikes that may have resulted in unlawful killings, with those responsible for such killings brought to justice in fair trials. Security concerns – real or perceived – must not be addressed by trampling on the rights of people living in Pakistan.

Earlier this year, President Barack Obama stated in a much-watched speech that decisions made by U.S. government now “will define the type of nation – and world – that we leave to our children.” It’s time for some accountability for these lofty words.

This article originally appeared on CNN World’s blog under the title “Time for U.S. to End Drone Secrecy.”

One thought on “Time for the U.S. to End Its Drone Secrecy”