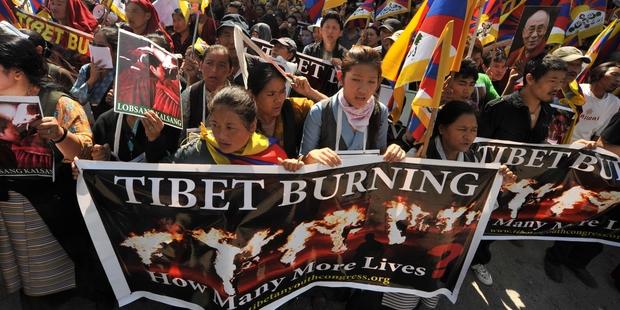 “If we stop these self-immolations, it will be like throwing water on the floor. Like just a waste. We have to continue to do this until we get some sort of result,” he said.

“I’m not a self-immolator, but still I think these people are brave. I give respect, but we still cannot stop this, even if we wanted to.”

In 1996 Bobpa Tsang left his home in the prefecture of Rebkong, southern Qinghai province where many of the recent self-immolations have taken place.

“I haven’t been back to Tibet for 16 years. We don’t understand the feelings of Tibetans in Tibet. They are under so much pressure from the Chinese government. Who would give up their life otherwise? Nobody wants to burn themselves. What mother would want to leave behind her babies, sons and daughters? Everyone wants to live a happy life. Why would they kill themselves? They are all the younger generation. The amazing thing is that they all carry the same message.”

In recent days over a thousand Tibetan students have clashed with armed police as they protest the publication of a government booklet that called the recent wave of self immolations “acts of stupidity” and condemned the study of Tibetan language as “irrelevant”.

The booklet, 10 real views of Tsolho Area, enraged Tibetan medical students in Tsolho (Hainan) prefecture in Qinghai Province when it was distributed in schools around the area.

The students called for an investigation into the booklet’s creation and for wider equality.

Police reportedly beat protesters after taking control of the school where the protest was taking place, resulting in 20 students being taken to the hospital.

On the same day, a solidarity hunger strike in which many community leaders and intellectuals participated took place across Tibet and China, including areas such as Lhasa and Rebkong, also calling for a stop to the immolations.

More than 60 Tibetans from all walks of life simultaneously took part in the solidarity protest.

According to local media reports, on November 14, Chinese authorities in the Malho region of eastern Tibet announced a series of strict measures targeting the ongoing wave of self-immolations.

Local officials were ordered to punish self-immolators, their families and even those who offer condolences and prayers to bereaved family members.

This has reportedly included cancellation of government aid to families of self-immolators as well as to many development projects in small villages where self-immolations have taken place.

Bobpa Tsang said the protests started in February 2009 in reaction to a wave of repression that swept the country following the protests in the region in March 2008 and the Olympics in August 2008.

“After the Olympics the world turned its eyes away from Tibet and China started the brutal repression of the Tibetan people.

“They imprisoned teachers, students, poets, monks, nuns and environmentalists who they saw as a threat. They accused Tibetan businessmen of supporting Tibetan freedom movements and confiscated millions of pounds from them and imprisoned them for life.

“They started to destroy Tibetan language, and the traditional Tibetan nomadic way of life by confiscating their land and livestock and forcefully moving them to newly built resettlements.

“During the mass protests across Tibet in 2008, they started to fire into crowds killing many innocent people.

“That is why people started to set themselves on fire in 2009 and it has spread across Tibet.”

On November 7, Tamdrin Tso, a 23-year-old mother of a six-year-old boy, set herself on fire and died in the center of Drorong Po village in Dowa township in Rebkong (Chinese: Tongren).

According to Tibetan sources in exile, local Tibetans had seen Tamdrin Tso praying for those who had self-immolated: “She said Mani mantra [mantras associated with the Dalai Lama] and took vows about fasting and not drinking. Also she prayed and offered butter lamps in the monastery. Local people said that even though Tamdrin Tso did all of these things, in the end she could not bear it. And she set fire to herself.”

In a joint letter to Chinese President Hu Jintao on November 3, 2011, Amnesty International and Human Rights Watch called on the Chinese government to review the human rights situation across the Tibetan plateau and to address the underlying causes of protests that have led Tibetans to set themselves on fire.

The organizations called on the government to put an end to policies that infringe on fundamental freedoms and human rights of Tibetans, including freedom of expression and religion, and the heavy security presence in Tibetan-populated regions of the country.

Bobpa Tsang thinks that Tibetans will continue to self-immolate in protest until “China looks into why Tibetans are self-immolating and offers some sort of solution to their demands. Then the Tibetan people will stop. If China continues to forcefully and brutally repress the Tibetans, then self-immolations will still happen.”

But he doesn’t know what to say to other Tibetans considering taking such action. “It’s difficult to send them a message. In my opinion I couldn’t say ‘oh you have to self-immolate.’ And I don’t want to say ‘self -immolation needs to stop.’ It fully depends on China and its policy on Tibet. So I don’t know what to say to them. Every time I hear a self-immolation happens in Tibet, it doesn’t matter where they come from or if they are my friends, I feel helpless, like I have no hands.”