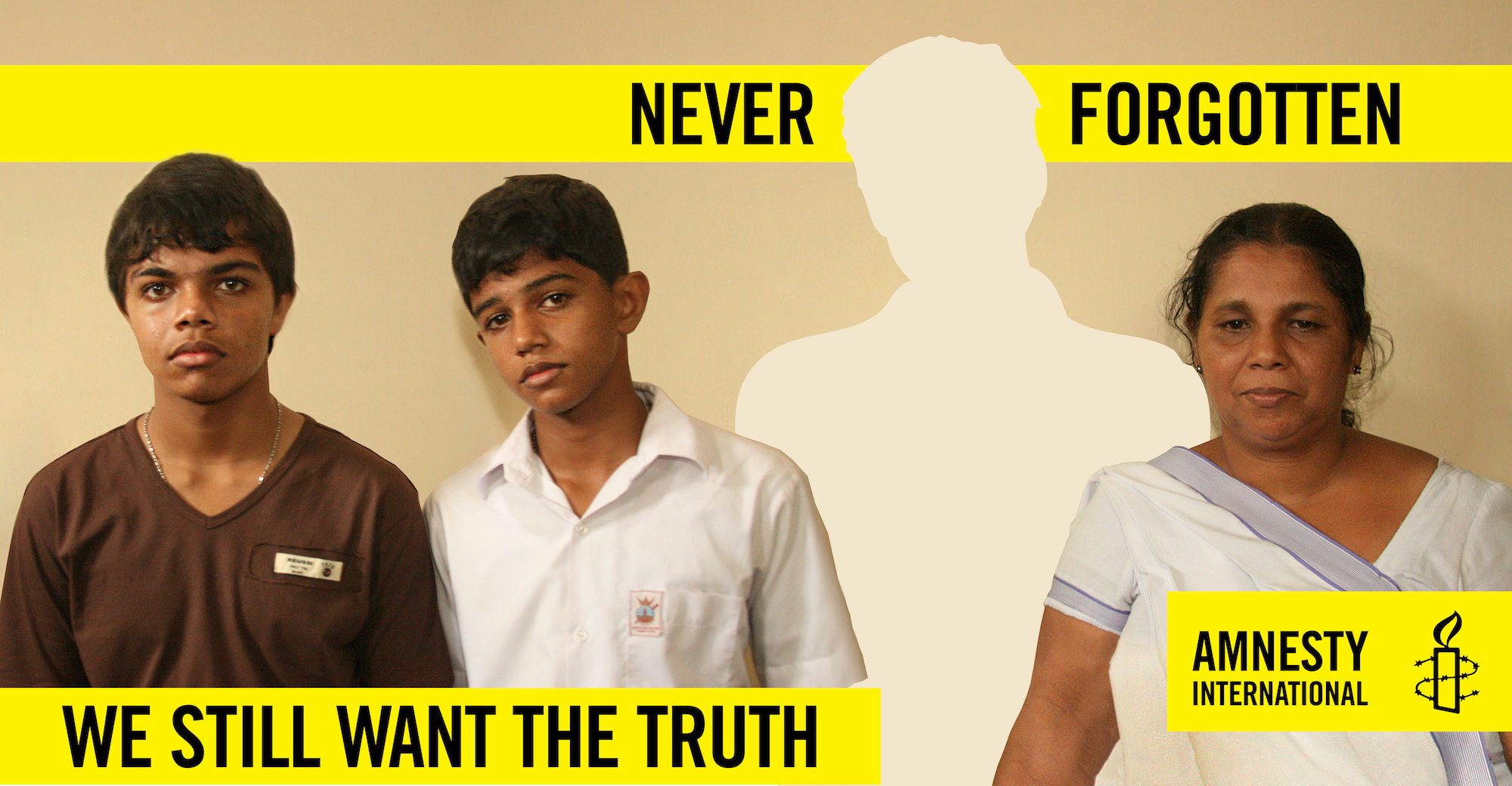 Last fall, I told you about “Silenced Shadows” – a poetry competition that Amnesty was launching in Sri Lanka on the theme of enforced disappearances. Sri Lanka has experienced at least 80,000 cases of enforced disappearances over the past 30 years. The vast majority are still unaccounted for and the perpetrators remain unpunished. The agony of the families of the disappeared – not knowing whether their loved ones are alive or dead, or what condition they’re in if they are still alive – continues unabated to this day.

We’re pleased to announce the 15 winners of the competition – five poems each in English, Sinhala and Tamil. The winning poems are available online now. This fall, Amnesty will publish a trilingual book, with each poem presented in its original language and translated into the other two languages.

Her face is an empty headstone/a blank, wrinkled page,/but her eyes are a story/and in them I read/of stolen people, vanished off the earth/like shadows in the night, – “Still Waiting” © Radhia Rameez

Relatives of the disappeared fight two battles: the struggle with the authorities to account for the disappeared, and the deeper struggle to maintain hope over despair. The poems describe this hope:

The poems show, not just hope, but the resilience and persistence of the families of the disappeared:

I will not cease to search/I will not stop my questionings,/I will not die, but live to the end of time/Seeking my son and asking questions from every one. – “Looking for Raju” © Basil Fernando

Reading these poems, I can only feel renewed determination to keep up the fight for accountability for the disappeared. If those most directly affected by the disappearance – the mothers, fathers and other relatives of the disappeared – can vow to “not die, but live to the end of time” in their quest for the truth, how can the rest of us not support them in their struggle? The human rights violators will succeed if the families don’t eventually obtain justice. We cannot and must not let that happen.

“Fine,” you may say, “but what exactly can I do for the disappeared in Sri Lanka and their relatives?”

I’m glad you asked. One emblematic case of enforced disappearance in Sri Lanka is the journalist/cartoonist Prageeth Eknaligoda. He went missing on the evening of Jan. 24, 2010, shortly after leaving work.  Two days earlier, he had published an article critical of then President Mahinda Rajapaksa. His wife Sandya has called his disappearance “one of the worst crimes in the world.” Amnesty has joined Sandya in her campaign to get the Sri Lankan government to account for Prageeth’s whereabouts. While several military intelligence personnel were arrested in recent months in connection with his disappearance, there have been no indictments or convictions so far; international pressure is still needed.

So, you can do two things to take action on Prageeth’s case:

4 thoughts on “Sri Lanka Poetry Competition: “And the winners are….!””