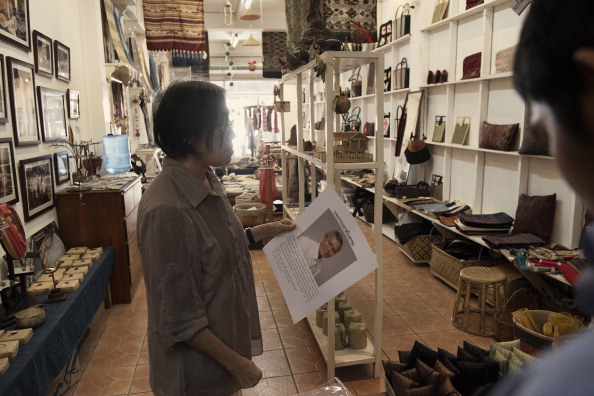 It’s always in the eyes. When we meet with the families of the disappeared there are a range of messages in the eyes – from fear to loss to sorrow – but also an occasional flicker of hope. Dr. Ng Shui-Meng came to Washington, D.C. recently and expressed all these feelings plus one other – determination.

Ng Shui-Meng is demanding an explanation for the December 15, 2012, disappearance of her husband Sombath Somphone from a police checkpoint in the Laotian capital of Vientiane.

She was able to obtain poor-quality video footage of the checkpoint, which shows Sombath reluctantly getting out of his Jeep which is then driven off by someone else. A short time later we see Sombath and two others get into a truck that rapidly leaves the scene.

Shui-Meng, a former senior UNICEF official, described her 63-year-old husband as well-known and respected by both local and national government officials.

”
Amnesty International’s report, Laos: Caught on Camera, shows that Sombath Somphone is an unlikely target for the “kidnapping” suggested by the Lao government. As an active member of civil society, Sombath founded the Participatory Development Training Centre in 1996 to promote education, leadership skills and sustainable development in Laos. In 2005, he received the Ramon Magsaysay Award for Community Leadership.

Shui-Meng, a former senior UNICEF official, described her 63-year-old husband as well-known and respected by both local and national government officials.  Often referred to in Laos as “Uncle Sombath,” he worked with authorities for the people’s right to livelihood, health, education and a clean environment.  With no threats or indications of trouble, Shui-Meng still appears shocked at her husband’s disappearance.

Shui-Meng recently wrote a letter to Sombath with the sad news that his mother died a few weeks ago.

“I am … saddened by the fact that your kind and gentle mother who had never caused any harm to anybody, had to suffer the pain of you, her most beloved son, being taken away from her side when she most wanted you to be with her during the last days of her life.”

Shui-Meng reports that there seems to be a “wall of silence” that has fallen inside the country as a result of Sombath’s disappearance. “It’s clear that civil society’s space has narrowed. They try to continue their work, but the space has been limited.”

Amnesty International USA is part of a campaign to return Sombath Somphone to his family. You can work with us by contributing a photo to our Flickr campaign, Where is Sombath?