Four years ago, Ratnam Ratnaraja, a 24-year-old Sri Lankan man, went missing. His parents still don’t know what happened to him. We think the Sri Lankan government does.

In June 2009, Ratnam had been visiting his family in northern Sri Lanka during his usual 10-day holiday before returning to resume his engineering studies at a university in the south of the country. He said goodbye to his family on June 21 to make his way back to the university by the next day. But he never arrived. His parents have been desperately searching for him ever since. 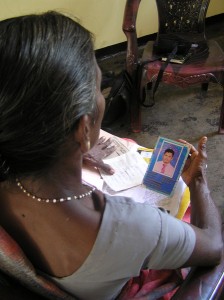 Hundreds of relatives still wait for information about their loved ones (Photo Credit: Private).

In recent decades, Sri Lanka has suffered through a brutal 26-year civil war, when government forces battled the Tamil Tigers, a separatist group seeking an independent Tamil state on the island. Both sides committed gross human rights abuses, including torture and indiscriminate killing of civilians. Thousands of suspected supporters of the Tigers were “disappeared” by government forces.

When Ratnam went missing in June 2009, the war in Sri Lanka had been over for a month, with the government having defeated the Tigers. But the end of the fighting didn’t mean an end to human rights violations.

Over the past four years, since the end of the war, Amnesty has continued to receive reports of torture, arbitrary detention and enforced disappearances being committed by the security forces. In the vast majority of these cases, there have been no investigations or prosecutions. The relatives of the “disappeared,” like Ratnam’s parents, are still waiting to learn the fate of their loved ones.

Today, on the International Day for Victims of Enforced Disappearance, we are demanding that the Sri Lankan government finally “tell the truth” about human rights violations, including enforced disappearances, in the country and end impunity for past crimes. Sign our global petition to the Sri Lankan government to support Amnesty’s six-point agenda for human rights progress in the country. Add your voice to the call for truth and justice in Sri Lanka.