An act of kindness transformed Liu Ping from a factory worker into a passionate anti-corruption activist in China. Her daughter, 22-year-old Liao Minyue, tells their story.

My mother, Liu Ping, was just an ordinary Chinese woman with a kind heart.

We were very close. I chose to live with her after my parents divorced about 10 years back. We never fought, not even once. We used to go to the markets to collect old and unwanted vegetables for food. It never once struck me as anything to be ashamed of. On the contrary, those were warm and intimate times, because we were together.

But one night, everything changed. My mom was moonlighting as a street vendor in the evenings to supplement her monthly income of RMB 800 (130 US Dollars) as an iron and steel plant worker.

Troublemakers turned up at her stall and my uncle tried to help. He was badly beaten up.

Local authorities ignored the incident, but a group of lawyers stepped in to
resolve the case free of charge. The kindness they showed sparked my
mom’s activism – she began actively advocating for workers’ rights.

That was in 2011 when I was in high school. Our lives changed drastically after that.

My mom started giving speeches on the streets and distributing flyers. She also tried to run for the local People’s Congress as an independent candidate so she could help workers who had been forced to retire. She was away from home for days at a stretch.

Strangers whom I now realize were plainclothes police would turn up at our door. I worried about her, especially when I couldn’t reach her – that usually meant she had been beaten up. I was completely against what she was doing and tried everything to stop her. The police and local party officials would also approach me in a bid to get her to stop what she was doing.

I had no idea what she was involved in. She protected me by not telling me about it. There was talk in the neighborhood that she was up to no good, and I started believing what I heard. Our relationship became badly strained as a result.

Arrested for denouncing corruption
Then last year, my mom and two other anti-corruption activists, were arrested for holding a small private gathering and displaying a banner demanding that government officials make their assets – like property and investments – public. After that, I lost faith in the Chinese Communist party, and I posted an open letter online announcing my withdrawal from it. I was prepared to face the consequences.

My mother and the other two activists are said to be linked to the New Citizens’ Movement, a loose network of human rights activists. When she was sentenced to six and a half years in prison in June, I was outraged. I posted another letter online, expressing my deep disappointment.

Over the past year, I’ve been reflecting on my earlier attitude to my mother’s activism. I deeply regret trying to stop her. What my mom and the rest are facing are the direct consequences of all our apathy and cowardice. 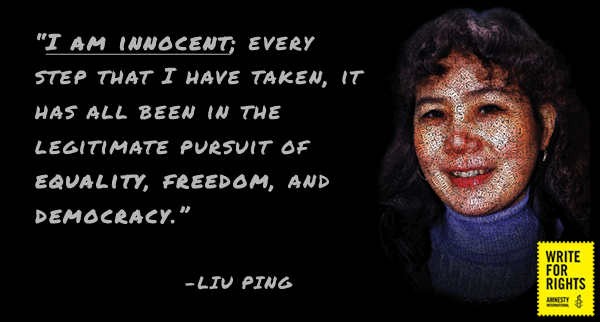 Now I have no qualms about accepting interviews with the media to talk about her. My passport has been revoked and I faced pressure from the authorities in my previous job, but I’m not afraid if I face a little harassment because of it. After all, I’ve only got one mother.

Liu Ping is one of our 2014 Write for Rights cases. Please take action now.