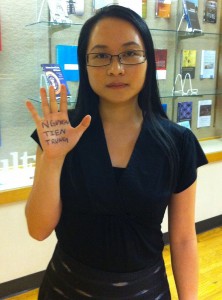 5 years,
your voice I couldn’t hear
your smile I couldn’t see
My heart filled with memories
and the shared moonlight, only…

I write these words with extreme sadness, as of September 5, I know my fiancé, Nguyen Tien Trung, a prisoner of conscience in Viet Nam, is not being released as part of the amnesty issued by the Vietnamese government to mark National Day (September 2nd). Only 5 “national security” prisoners were released on this occasion, and only one of them is a well-known dissident – blogger Phan Thanh Hai (aka Anhba SG) of the Freelance Journalist Club – whose term of imprisonment would end in one month anyway.

Trung’s parents visited him on September 5 for a short 30 minutes, during which Trung only had time to list the books he wanted his parents to send him. As if he had no anticipation of an early release. Yet, September 16, his birthday, is approaching. And it is still difficult for me to think of Trung having to spend his 30th birthday in prison.

Trung was sentenced in 2009 for “propaganda against the socialist state” and “organizing to attempt to overthrow the people’s government,” for his dissenting writings and his leadership in peaceful political organizations in Viet Nam. Prior to his arrest, he was called up for mandatory military service, even though he was working full time and pursuing an MBA degree in Viet Nam.

Trung was expelled from the military on July 6, 2009, just one month before the end of his service, in order to be arrested the following morning, on July 7. Trung was 25 years old when he was forced to complete his military service. He is going to turn 30 years old, sadly, in jail. 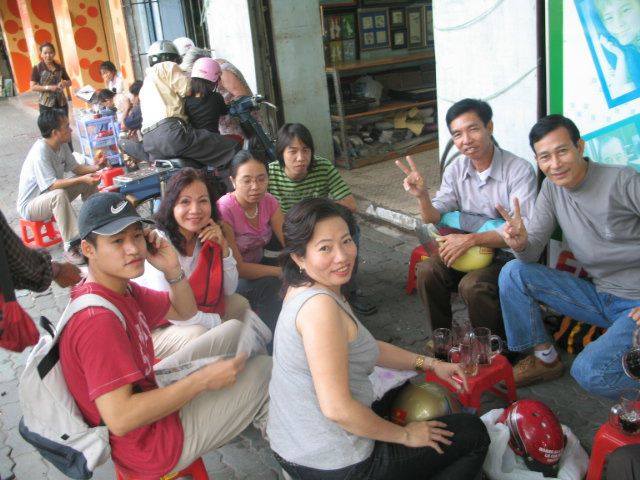 Trung is but one of the hundred cases of political dissidents and independent bloggers who have faced harassment and arbitrary detention in Viet Nam. On Facebook, our friends have been circulating a photo from 2008 of the good old days.

The photo features Trung and other bloggers such as Dieu Cay and Ta Phong Tan, taken by Phan Thanh Hai, having an enjoyable tea time on the pavement of a Saigon street. Five years later, in 2013, four of them have been in prison – Dieu Cay, Ta Phong Tan, Trung and Phan Thanh Hai. Two of the others in the photo have fled Viet Nam. The final two who remained in the country have been harassed by the government.

What happened to the group of bloggers in the photo is witness to the situation bloggers face in Viet Nam: life is only easy with eyes and mouths closed; and those who dare to think independently and speak out – yes, merely speak out their thoughts and form friendships with people of similar ideas – will see their freedom and security endangered by the retribution of the state.

But look at those friendly faces and bright smiles – who would say they can be the enemy of the state? All they did was dare to defy power, with their courage and intellect, for the sake of the rights of their people. Yet oppressive governments are fearful of such independent minds whose righteous causes and actions have won people’s hearts. 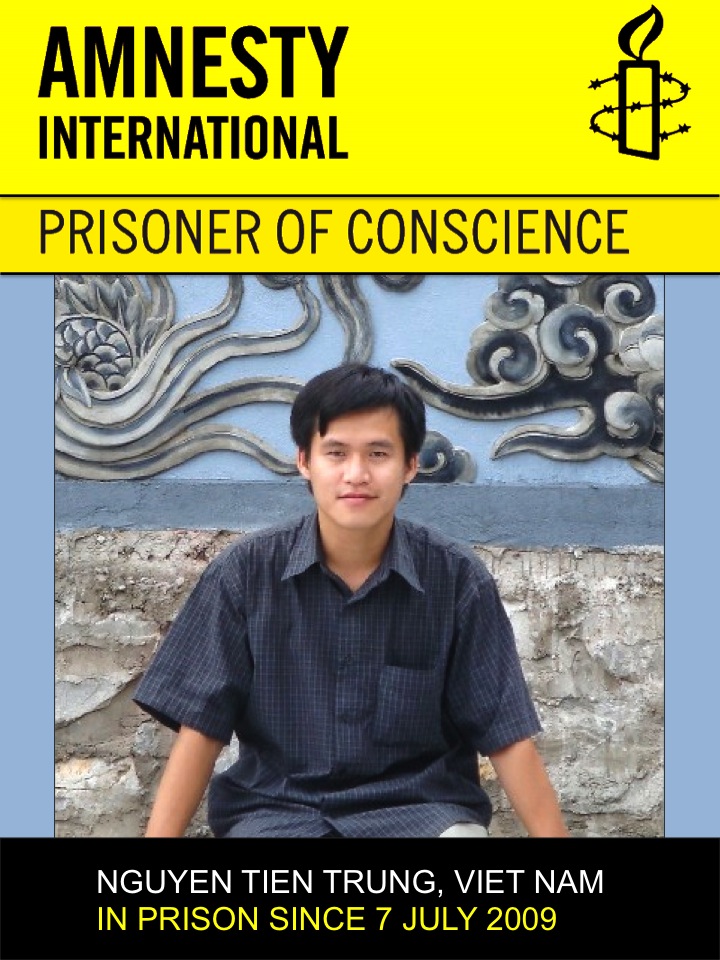 Political dissidents in any country are always a small minority, a minority that makes history but a minority that is vulnerable nonetheless. They need solidarity actions from the world to protect their own safety and liberty. It has been five years since Trung has been in prison, although I have relentlessly sought ways to advocate for his release. “The arc of the moral universe is long,” painfully long indeed, for those who actually spend the most beautiful years of their youth in prison, away from their loved ones, for only speaking out their mind.

I have shared our story to appeal to the international community and international human rights organizations. On the occasion of Trung’s 30th birthday, I ask again for your help to raise your voices and take action for Trung’s release and to protect political dissidents in Viet Nam.