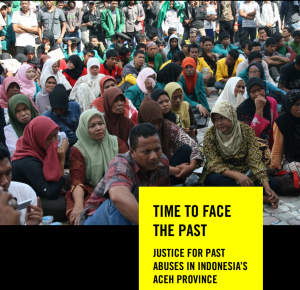 What has this to do with Aceh?  The U.S. President’s ostensibly reasonable desire to “look forward” resonates darkly for those of us who were active against Indonesia’s brutal 25-year occupation and oppression of East Timor (Timor-Lesté). Since the new country’s 1999 independence, presidents of Indonesia, including the current one, frequently respond to calls for accountability by saying that Indonesia must look forward rather than concentrate on past abuses. Such sentiment rings hollow. Most of the same ranking Indonesian officials who were active in pre-independence East Timor are untouched by any accountability for their actions; many have been promoted, and some even orchestrate violent suppression of rights in, for example, West Papua.

When I was in East Timor before and immediately following the U.N.-sponsored referendum for independence, I came to viscerally appreciate the yearning for justice by still-suffering Timorese families. The horrors visited upon those people cannot be undone. However, it is political cynicism to dismiss their desire to know the truth and to have perpetrators held accountable. Imagine that a member of your family is murdered and the perpetrator is known, and walks free. Now imagine being told, “You shouldn’t dwell in the past, but look forward.”

In Aceh, a 2005 peace agreement called for the establishment of both a Human Rights Court and a Truth and Reconciliation Commission for Aceh. These years later, neither has been implemented. None of those responsible for serious human rights abuses have been brought to justice; attempts to provide reparation to victims have fallen far short.

This new report systematically and agonizingly focuses on the particular miscarriage of justice in Aceh. It implicitly and directly mirrors past unresolved atrocities in East Timor and current abuses elsewhere in the nation. The plight of Aceh families mirrors the same implacable refusal to legally prosecute crimes by Indonesian forces in West Papua, Java, the Moluccas and so on.

Only by demanding accountability can future offenses may be avoided – deterrence can serve to intimidate potential offenders. The failure to legally pursue past crimes and criminals makes a mockery of “looking forward.” The past is where the future is born; impunity for past actions encourages more criminal behavior. “As long as the fate and whereabouts of the disappeared are not known to the family, enforced disappearance is a continuing violation which persists, often for many years, after the initial abduction.”

One thought on “Looking Forward, Ignoring the Past?”