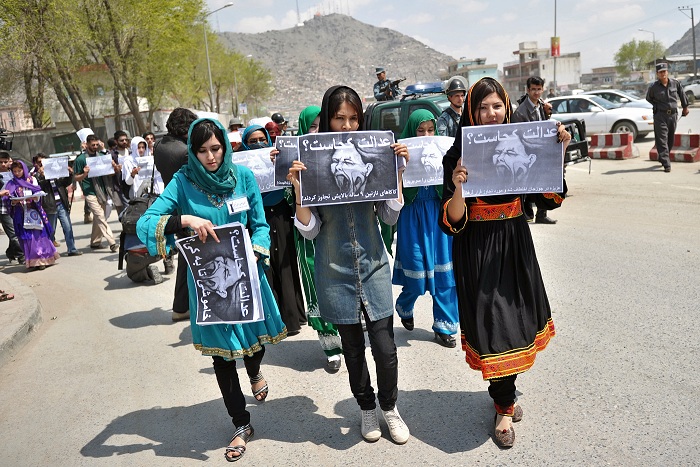 Afghan Young Women for Change (YWC) activists, holding placards which read "where is justice?", take part in a protest denouncing violence against women in Afghanistan in Kabul on April 14, 2012.

President Obama made an announced visit to Afghanistan on May 1 to sign an agreement intended to lead to a pullback of US troops from Afghanistan by 2014. The document is very specific on issues around the arrangements related to security and interestingly, trade and commerce but inadequate when talk to turns to human rights in general and specifically women’s rights.

Amnesty will continue to urge the US government to implement an action plan to protect and promote women’s rights in Afghanistan as they pull back from the country.

Women in Afghanistan, however, aren’t waiting around for vague assurances by the US and Afghan governments. They are taking matters into their own hands and demanding justice for the victims of past human rights violations and the promotion of human rights for all in their country.

Young Women for Change led a demonstration protesting against injustice and calling out the Afghan government for its failure to prosecute human rights violations committed against women and girls. They noted:

“Since Nawroz, New Year, at least five women have been killed in Afghanistan. Three women were killed in Herat, one of whom was beheaded by her husband. Another woman was killed by her husband in Khost and another was hanged after the unjust decision of the tribal court in Paktya”

But now, even the rights of the women to protest the injustices of the government are under threat. They are under threat from a Taleban movement that espouses and extreme ideology that stands against women’s rights.

But the threat to women and girls are also from an Afghan government that has shown a worrying pattern of pandering to Taleban ideology at the expense of human rights and a US government that seems more interested in declaring victory on the “war on terror” than in securing human rights gains promised by the Bush and Obama administrations.

We will not abandon you, we will stand with you always … [it is] essential that women’s rights and women’s opportunities are not sacrificed or trampled on in the reconciliation process.

This is why the US must implement an action plan to ensure that the US and its allies carry out promises made to the women of Afghanistan. And we need your help to demand that Afghan women’s rights are non-negotiable.

3 thoughts on “Is the US Abandoning Afghan Women?”