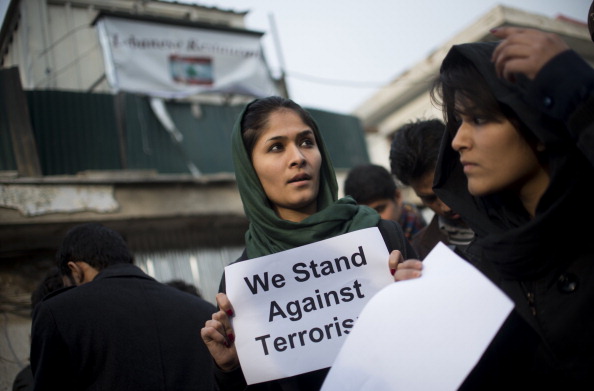 As soon as I told my family I was planning to return to Afghanistan at this time of year, they started to worry. Every year around now – Nowruz, when Afghans celebrate the New Year – the Taliban spring offensive starts.

This year, the added element of upcoming presidential elections on April 5 has heightened fears of attacks. My husband tried to convince me to postpone my visit, but I had already made my decision to return to finish the research I started last year with my colleague Joanne Mariner.

When I landed in Kabul, I heard from different people how the security situation has deteriorated – the driver on the way to my hotel, the shopkeepers, civil society workers and human rights defenders. The biggest worry was that the Taliban are increasingly targeting civilians.

After a recent attack on a Lebanese restaurant in Kabul, the city’s expatriate community has stopped going out to cafés and restaurants – and the loss is affecting local businesses.

Despite this, Kabul seemed quiet. But everyone was hyper-alert about the elections and the Taliban’s warning to increase its offensives as the date approaches. We drove to Jalalabad, more than two hours to the east, where we stayed in one of the modest hotels in the city.

I jumped out of my bed, fearing the hotel where I was staying was under attack. My heart was beating faster and faster as I rushed outside to see what was happening. Gunshots rang out close by.

”
On the first day, the situation seemed calm, but people who came to visit us from other provinces were jittery and wanted to return home before nightfall. They spoke of civilian casualties caused by all sides in the conflict, and some were themselves victims of such violence.

Just after 5 a.m. on our second day in Jalalabad, I was awoken from a deep sleep by a loud explosion which rattled my windows. I jumped out of my bed, fearing the hotel where I was staying was under attack. My heart was beating faster and faster as I rushed outside to see what was happening. Gunshots rang out close by.

I was relieved that it was not our hotel being attacked, but questions still came flooding to my mind. Where did the gunshots and explosion take place? How many people had been injured and killed? The gunfire and blasts continued throughout the morning until about 9 – 10 a.m.. I immediately informed my family and my office about the incident, and assured them that my colleague and I were both unharmed.

But knowing the location of the attack didn’t make us feel any safer. Some locals told us that Taliban are consciously targeting civilians, whom they label “spies” or “collaborators.” This informed our decision to leave Jalalabad before dark for the return trip to Kabul. On the way, the driver relayed many stories about Taliban attacks and areas that come under Taliban control after dark.

So you can imagine our relief when we arrived back to Kabul safe and sound. But the new-found sense of security was short-lived.

Later that night, we heard that Kabul’s exclusive Serena Hotel had been attacked. We started listening to the local news to find out what exactly had happened and who it was responsible, but there was very little hard information about the attack. 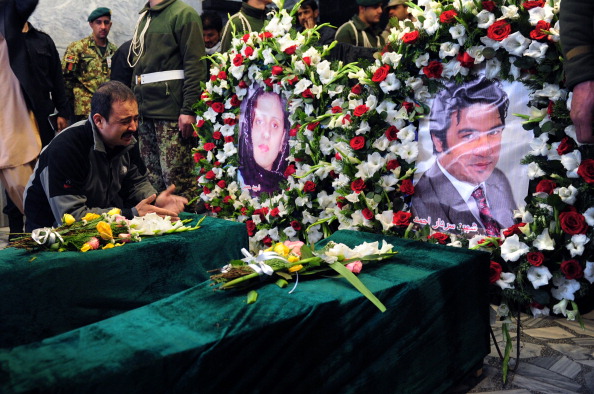 The nephew of slain Afghan AFP reporter Sardar Ahmad laments over the coffins of two of Sardar’s children alongside images of Sardar’s wife and Sardar during funeral ceremonies on March 23, 2014 (Photo Credit: Roberto Schmidt/AFP/Getty Images).

The next morning, we learned that the Taliban claimed responsibility for the horrific attack, which killed nine civilians, including children. More shockingly, I heard the very sad news that the prominent local Agence France-Presse (AFP) journalist Sardar Ahmad, his wife and two of his children were among the dead. Their youngest child is critically wounded and fighting for his life in hospital. I have known the whole family for years.

Taliban spokesperson Zabiullah Mujaheed confirmed in a statement this morning that the
“Kabul Serena Hotel was attacked by a group of four hero martyrs…who conducted a successful military operation against infidels and their supporters.”

According to the Afghan Ministry of Interior, all four fighters were teenagers who were hiding pistols inside their socks when they entered the well-guarded hotel.

At the time of the attack, Sardar and his family were apparently in the hotel having dinner to celebrate the Afghan New Year. This is not the first time Taliban have attacked a civilian target and legitimized their acts by making false accusations against their victims and trying to connect them with the intelligence or military agencies. Taliban are increasingly choosing “soft” civilian targets, like hotels and restaurants, in order to win the propaganda war in Afghanistan, with total disregard for the protection of civilians and civilian objects under international humanitarian law (IHL), the law of war.

How do Afghans view these attacks?

Violence, suicide attacks, aerial bombings and night raids have sadly become part of daily life for Afghan people in the past 13 years. Many have witnessed the killing of their loved ones by the Taliban as well as international military forces in Afghanistan.

Many people are asking why ordinary Afghan civilians are killed by the international forces who came here to protect them. At the same time, ordinary civilians are seeing more and more brutality from the Taliban. Since women and children are frequently killed in these attacks, people wonder how anyone could try to legitimize them as targets by calling them collaborators and spies.

The Taliban’s use of children in the attack on the Serena Hotel and other incidents, including suicide attacks, is a clear breach of international humanitarian law and international standards on children’s rights.

The Taliban are well aware of their obligations under international humanitarian law as a party to the conflict, but they only refer to it when it suits them. The Taliban must immediately end their brutal practice of targeting and killing civilians and abide by international humanitarian law. Likewise, they must immediately stop the use of children as fighters and suicide bombers.

In the course of the armed conflict, as well as in peace time, the Afghan government has a duty to make sure that all civilians and civilian objects are protected. That will need to be at the very top of the agenda for the new leadership of Afghanistan.

My family will continue to worry about me and my safety as long as I am in Afghanistan, but nothing can discourage me from doing this work while no civilian in the country is safe.