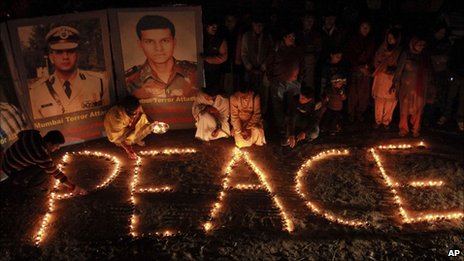 Remembering those killed in Mumbai on November 26, 2008

People all over the world are remembering and mourning the 166 people killed in a brutal series of attacks against innocent civilians two years ago today.  Those victims were of every caste, creed, gender and national origin that is so reflective of India’s diversity. But, it was also on November 26, 1949, when the Indian constituent assembly adopted a constitution that among other things guaranteed social, economic and political justice.

The attacks two years ago are a grim reminder of the human rights violations that go on in the world today, committed not just by governments around the world, but also by shadowy groups with radical views.  To a family that lost a loved one on that day in Mumbai, just as a family who might have lost a loved one at the hands of any government, the loss is still a loss and it is still a human rights violation.   And, those committing the human rights violation must be prosecuted just as Mohammed Ajmal Kasab, the sole surviving attacker was prosecuted (with a guarantee of a fair trial and no use of the death penalty).

26 thoughts on “For India, November 26 Comes With Mixed Feelings”