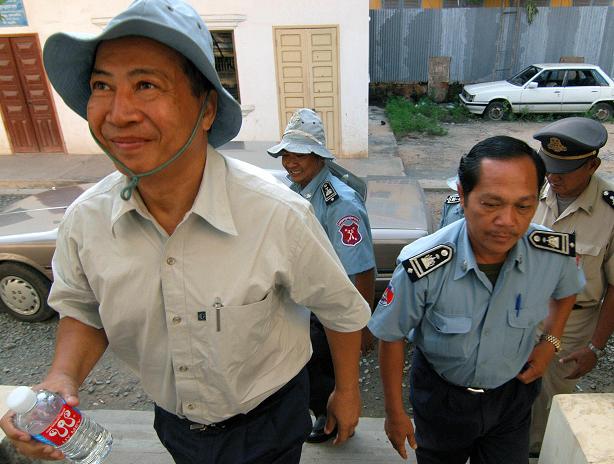 Mam Sonando has long been targeted by Cambodia authorities for speaking out. Here he was arrested in 2005 and charged with “defaming the government.” (Photo TANG CHHIN SOTHY/AFP/Getty Images)

When you think of a beehive, what comes to mind? A constant hum of activity; bees working together; social interaction for a common goal. This sort of activity is not welcome in Cambodia. With its in depth reporting on difficult political issues, Beehive Radio in Cambodia embodies the image of a real beehive.

On June 26, Cambodian Prime Minister Hun Sen called for the arrest of 71 year old Beehive Radio journalist Mam Sonando. He is charged with offences against the state following a broadcast that focused on forced evictions.

The government is forcefully evicting residents in the Kratie region from land it is selling to a Russian rubber company. In May military police in Kratie opened fire at a group of around 1,000 families who refused to leave their land. They killed a 14 year old girl and injured 2 others. In addition to Kratie, thousands of other people face forced evictions throughout Cambodia. 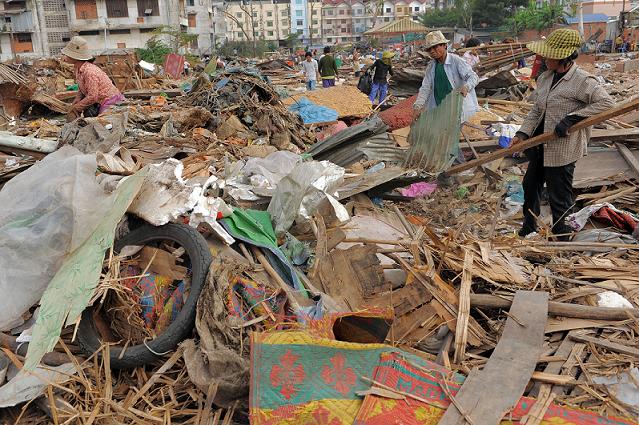 Cambodians try to salvage some belongings after the forced eviction of residents from a slum village in Phnom Penh January 4, 2012 (Photo AFP/Getty Images)

The mass evictions and crackdown on free speech breaks the country’s own laws. Cambodia is party to various human rights treaties including the International Covenant on Economic, Social and Cultural Rights and the International Covenant on Civil and Political Rights. Both covenants prohibit removing people from their land against their will. In addition, freedom of expression is a fundamental human right guaranteed by Article 41 of the Constitution of Cambodia.

In addition to his Beehive Radio reporting, Mam Sonando is also a leader of the local nonprofit the Association of Democrats, that seeks democratic reforms in Cambodia. Last month Mam Sonando travelled to the US and Europe to investigate stories of the Cambodian government’s human rights abuses.

The government accuses him of being part of a secessionist movement although his arrest seems to be related to his involvement in broadcasting stories on Cambodia’s human rights record. Prior to Mam Sonando’s arrest, Beehive Radio broadcast a report about a complaint lodged at the International Criminal Court accusing Cambodia’s government of committing crimes against humanity by displacing thousands of people through forced evictions. Beehive Radio is one of the only independent radio stations in Cambodia.

In the US, we value the freedom given to journalists. Reporting the news shouldn’t be dangerous business. However, this is Mam Sonando’s third arrest as a result of his reporting. Amnesty International considers Mam Sonando to be a Prisoner of Conscience.

Though we’re not sure how the radio station came by the name Beehive, certainly the sweet product of a free press will nurture the people of Cambodia.