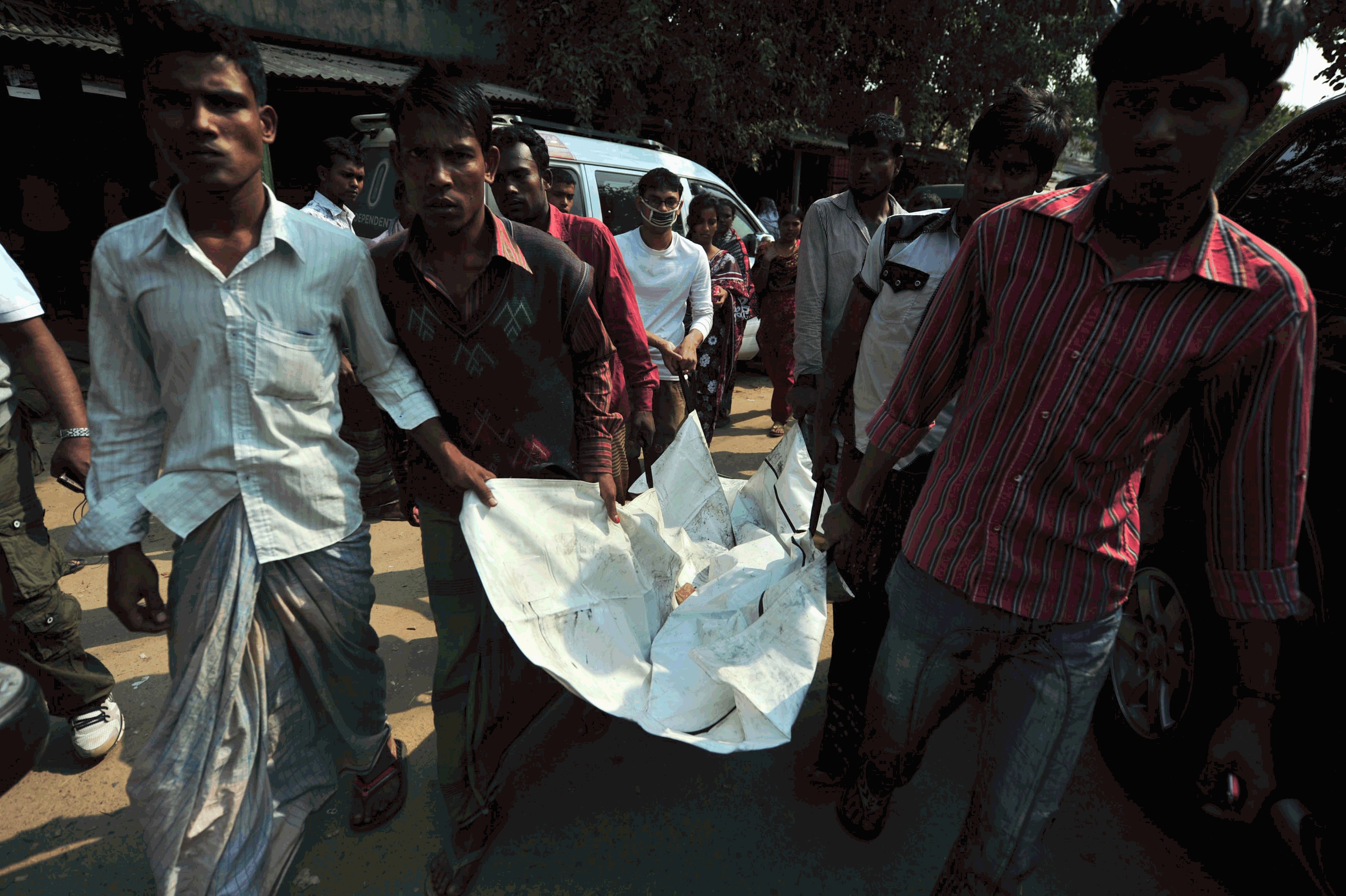 Bangladeshi men carry the body of a victim after a fire in the nine-storey Tazreen Fashion plant in Savar, about 30 kilometres north of Dhaka on November 25, 2012. Rescue workers in Bangladesh recovered 109 bodies on Sunday after a fire tore through a garment factory, forcing many workers to jump from high windows to escape the smoke and flames. (Photo credit STRINGER/AFP/Getty Images)

As Americans indulge in post-Thanksgiving shopping sprees in chain stores across the country and online, we are reminded of the real toll that cheap goods has on human rights in countries such as Bangladesh: the death toll from a horrific fire at a Bangladeshi textile factory has risen to over 110. Dhaka’s largest English-language newspaper tells of a harrowing scene inside the factory:

“Hot smoke filled the air within minute as soon as fire alarm rang and electricity supply became off. We were running to escape death through the dark. Many died inhaling smoke”

Since 2006, more than 500 people have been killed providing inexpensive clothing to American and European chain stores. This particular company, Tazreen Fashions, produce clothes for giant retailers such as Walmart. As the organization Clean Clothes Campaign stated in reaction to this tragedy: “These brands have known for years that many of the factories they choose to work with are death traps. Their failure to take action mounts to criminal negligence.”
The factory is in a district that houses many other export-led industries within the Bangladesh Export Processing Zone Authority or BEPZA. The BEZPA do not permit unions and other organizing activities as it is considered a “cumbersome activity”. Because of the blatant nature of illegality against organizing in the export processing zone, no one should think for a moment that this is just a tragic accident. No. This disaster must be a wake-up call for the protection of the human rights of workers in Bangladesh.
There must be an independent investigation into the causes of the fire, for compensation to be paid to the victims and their families and for those responsible for these conditions to face prosecution. Further, any investigation must result in concrete action from all parties to prevent future tragedies.
Post Views: 4,861