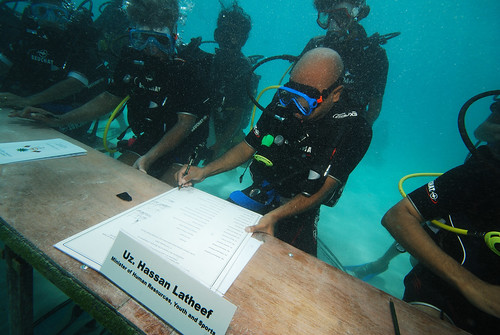 The country is taking radical steps to deal with the onslaught caused by other country’s use of fossil fuels.  Maldives will be first country in the world to be entirely carbon neutral.  They are trying to use some of the dead coral reefs that surround the atolls to literally raise the height of some of the islands.  And, they are working to reclaim land similar to the way in which Holland has done.  But, these are short term solutions.  Long term, Maldives must convince countries much larger than them that it is imperative that action be taking to end the global rise in temperatures.

Here is a video piece by the BBC World Service that highlights the plight of Maldivians and their fight against what might be a losing battle.