Based on the investigation of 70 cases, the report details how nearly all institutions in Pakistan, from military intelligence to political parties are complicit in the harassment, abduction, intimidation and killing of journalists. 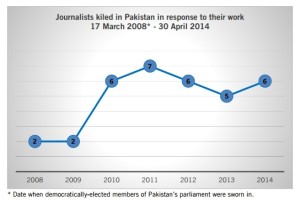 Against this robust army of enemies, the Pakistani journalist leads a precarious existence. The Committee to Protect Journalists lists Pakistan as the fourth most dangerous country in the world for journalists. In the 70 cases investigated by Amnesty International, preliminary investigations were conducted in only 32. There has been a prosecution in only one case. This is because even in cases where investigations are conducted, evidence collected and cases lodged, little political will exists to punish the perpetrators whoever they may be.

The consequence is a chilling effect on journalism in Pakistan, where the freedom of speech, can quite literally take the lives of those that exercise it.

Both international law and Pakistani law impose a duty on the Pakistani state to protect journalists. None of these existing legal safeguards however, seem to be making any difference in terms of the conditions that journalists face on the ground in Pakistan.

In this sense, the media companies that most journalists in failing to  make security an agenda in their own dealings with state actors in Pakistan. Journalists interviewed in the report also complained that little training exists for journalists in how to combat threats and harassment and how to report such incidents so that records are kept of those responsible for making them.

In addition, must security agencies be asked to reiterate their commitment to human rights and stop abusing journalists. Finally, non state actors and extremist groups must be required to immediately cease hate speech and edicts that invoke violence against journalists in Pakistan.

Take Action now. Stop Deadly Attacks against Journalists in Pakistan and join our Thunderclap Action in support of Pakistani journalists.