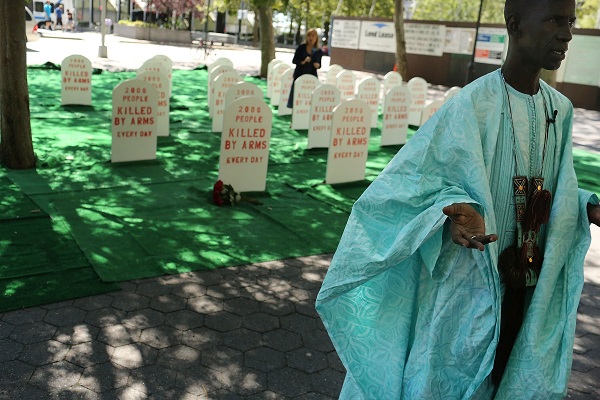 Amadou Maiga from Mali , who has lost friends in conflict, speaks in front of a mock graveyard across from the United Nations (UN) which represents those killed by arms everyday around the world. The group Control Arms set up the campaign to help draw attention to the issues of deaths by guns and other armaments. (Photo by Spencer Platt/Getty Images)

On November 8, the international community took an important step and recommitted itself to trying to rein in the unregulated global trade in small arms and conventional weapons. With a strong show of consensus, 150 countries signed on to a resolution that will restart negotiations in March 2013. There were no votes cast in opposition.

With the negotiations now scheduled, President Obama and his administration are presented with another chance to show leadership on the global stage and to answer the question of who actually drives U.S. foreign policy: the U.S. gun lobby or the President. On no other issue is this question as under scrutiny as the ATT, coming to a head when the U.S. delegation pulled a July surprise and torpedoed the negotiations in the last hours of the conference.

Predictably, with another conference scheduled, opponents to the treaty have launched incensed attacks that discard fact in favor of hyperbole. Among the consistently factually-challenged assertions is that the treaty will take guns out of the hands of U.S. citizens. Another piece of baseless propaganda revives the claim that any support of such a treaty is tantamount to trading away U.S. sovereignty.

The alleged threat to the Second Amendment is a red herring, as the treaty does not impact gun domestic ownership laws. The draft text unambiguously states that it is “the exclusive right of States to regulate internal transfers of arms and national ownership, including through constitutional protections on private ownership.” The fact that nothing in the treaty will undermine the sovereignty of the United States has been reiterated by U.S. officials ad nauseam, but clearly the facts are not really the issue for the opponents of the treaty.

In addition to creating a fictitious threat for domestic consumption, opponents do not acknowledge that the current lack of regulation of the global arms trade is contributing to one person being killed every minute, or roughly 500,000 deaths each year. It contributes to the displacement of 43 million people annually and to the 250,000 child soldiers currently serving in 19 different countries.

It is one thing to have a differing opinion about a foreign policy issue but it is another to attack an initiative that seeks to address a gaping need for millions or people and mislead people into thinking that their constitutional rights will be sacrificed if a treaty is secured.

The arms trade treaty is aimed shutting down the black market for arms at the global level, currently facilitated by irresponsible decisions by governments, who flout or ignore their obligations not to contribute to human rights violations. It is fueled by loop holes in the current international regime regulating global arms sales, transfers and other exchanges and the lack of enforcement by governments of the regulations that do exist.

In the next few months there will be more histrionics and alarms about the so-called impending colonization of the United States. This from the same people that claimed that claimed the U.S. had secret planes flying over the country, spying on God knows what and that is the tragedy. While no one has illusions that the treaty will be a panacea or a silver bullet that brings about world peace, it will bring some pressure, transparency and accountability. In conflict and post-conflict areas like the Democratic Republic of the Congo and Somalia for example, even that little bit can make a huge difference.

In the end, the people who stand to gain from continuing the status quo are human rights abusers, warlords, and arms dealers. The resounding consensus on the resolution to return to the negotiating table to address such a challenging issue is a clear confirmation that everyone agrees something has to be done.

The United States, as the largest producer of arms, has to decide whether it leads the global community to secure a treaty that regulates the arms trade and protects human rights or whether the National Rifle Association runs U.S. foreign policy.

One thought on “A Second Chance for U.S. Leadership on Arms Trade Treaty”