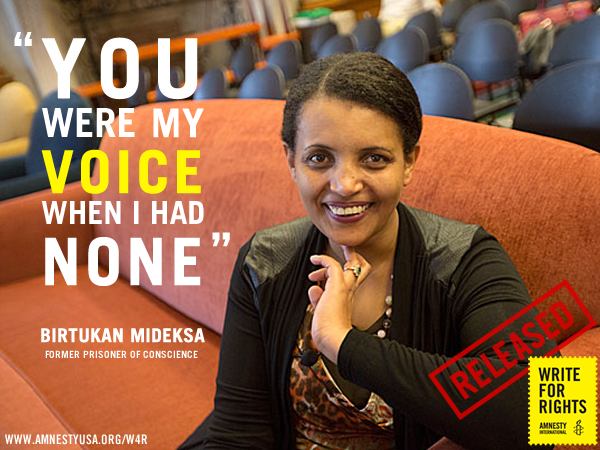 In the days surrounding Human Rights Day on December 10, I will be writing letters to people around the world – most of whom I have never met. As my messages begin to arrive in places like Chicago, Brasilia, Tel Aviv and Beijing, they will be joined by hundreds and thousands more. Together, we will speak with one voice to demand justice, cry for change and inspire hope.

The humble letter has long been part of Amnesty International’s work. It’s hard to imagine what a piece of paper can do in the face of injustice, particularly in the age of digital technology, social media and a 24-hour news cycle. Still, after fifty-three years of human rights advocacy we know that our letters can overcome overwhelming odds. Our letters can change lives. I hope that you will pick up your pen and join me during Write for Rights 2014.

During last year’s Write for Rights campaign, hundreds of thousands of people in 143 countries around the world took a record-breaking 2,373,422 actions. Three Prisoners of Conscience were released, and all ten of the individuals and communities featured received messages of hope and support.

But this work is about so much more than just numbers. It is about the human beings who are at the very heart of Amnesty’s work. They are living proof of the human rights abuses that confront the 21st century and confound the moral imagination. Their stories are also proof of the collective power of our voices to change lives.

Allow me to introduce you to a few of the human rights champions who inspire me to Write for Rights.

Inés and Valentina, indigenous Me’phaa women, were raped by Mexican soldiers in 2002. Instead of taking steps to carry out full and impartial investigations, the military tried to disprove the allegations – but the women would not be silenced. They brought their case before the Inter-American Court of Human Rights, which ruled in their favor. Despite the ruling, Inés, Valentina and their families continued to suffer through threats and acts of intimidation, and the Mexican state initially failed to address the violations. 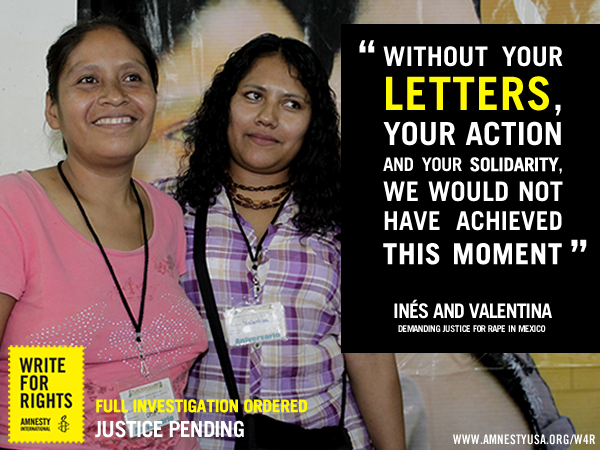 Finally, after thousands of letters were written on their behalf, the Mexican government took responsibility and publicly apologized for the rape and abuse of both women – to Valentina in December 2011 and to Inés in March 2012. In January 2014, four of the soldiers accused of torturing and violating Inés and Valentina were detained and charged. The women’s struggle is not over, but neither is our commitment to stand with them in demanding  truth and justice.

Yorm Bopha is a housing rights advocate, and a powerful voice for the rights of the Boeung Kak Lake community in Phnom Penh, Cambodia where thousands of people have been forced to leave their homes since 2007. In response to her activism, the Cambodian government tried to silence Yorm Bopha with baseless, fabricated charges of planning an assault on two men. She was sentenced to three years’ imprisonment, despite the fact that no evidence linked her to the crime. 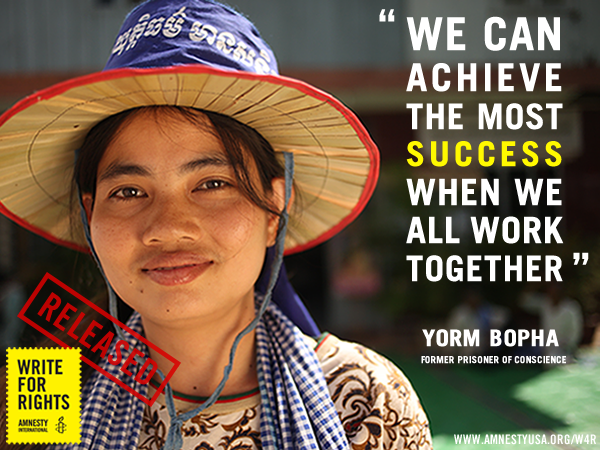 Yorm Bopha was released after an appeal hearing in late 2013, just as our 2013 Write for Rights Campaign was kicking off. Activists in 54 countries around the world took a staggering 259,900 actions on her behalf and more than 500 solidarity photos were uploaded to a solidarity flickr. The voices of Amnesty International activists helped amplify the calls of Cambodian human rights defenders and Yorm Bopha’s family and friends, as they relentlessly pushed for her release. She continues to defend the right to housing for the people of Boeung Kak Lake and all Cambodians.

As Inés, Valentina and Bopha’s stories show, letters have the power to tackle impunity and break down prison doors.One letter can change a life. Hundreds of thousands of letters can start a movement. Be part of the world’s biggest grassroots human rights movement, and sign up for Write for Rights 2014.