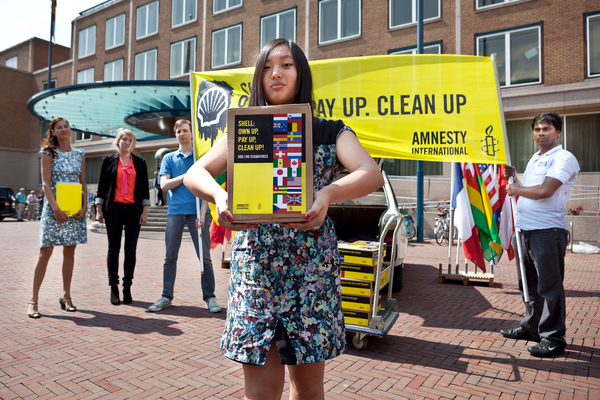 I’m going to New York this weekend to make history and to make change. And I’m not the only one.

On Sunday, 100,000+ people are expected to gather in New York for the largest climate march in history.   We are going to New York as heads of state from across the world prepare for the UN Climate Change Conference in Paris in 2015. The Paris meeting is seen by many as the last good opportunity for an international agreement for the next several years.

We are marching because we can’t afford to wait. Last year, United Nations independent experts came together for a landmark statement: “If we fail our environment, we fail to protect our human rights.” In fact, Secretary General of the United Nations Ban Ki Moon is marching with us. Talk about historic!

This is why I’m writing about environmental issues in a human rights blog. Here are just a couple of points that really drive home the connection between human rights and climate change for me:

I could go on. As Greenpeace’s Executive Director, Kumi Naidoo, put it, “There are no human rights on a dead planet.”  It really comes down to people living with dignity, and that’s what Amnesty International is all about.

In fact, for many years Amnesty International has worked to stop human rights abuses that intersect with environmental issues.  We’ve taken up the cases of environmental activists jailed or otherwise persecuted for their peaceful activism, and we’ve worked alongside communities from Bhopal, India, to the Niger Delta, to the Gulf Coast to confront companies involved in activities that undermine the right to a healthy environment and to demand that governments hold them accountable. Which brings me to this week’s climate march…

I am asking you to join us in making history this Sunday. Amnesty International USA is a partnering organization in this march and will have its own section in the march. Join our contingent by meeting us at 86th Street and Columbus Avenue or contact us on our event page to learn about out how to meet us in New York.  If you cannot make it to New York, see if one of the 2200 companion events worldwide is happening near you. Or consider organizing your own event. A heartfelt discussion about climate change can change the world by changing minds.

Governments, corporations and other institutions have failed terribly when it comes to climate change. Scientists have been delivering strong evidence of climate change and its impact for decades now. But even such direct evidence is not enough to motivate the real large scale changes that we need. History has shown that when our institutions fail on such large scale, the only force that can correct them is people raising their voices, taking to the streets, and not letting up until change happens. SO LET’S DO IT!

Aaron Tovo is AI USA’s Minnesota Area Coordinator and is a member of Group 37. Before that he was the Group Coordinator of Group 4 in Seattle and founder of Group 640 in Saint Paul. He has also been active on climate issues with The Minnesota Renewable Energy Society.

15 thoughts on “‘There Are No Human Rights on a Dead Planet’ Why On Earth Is Amnesty International Joining the People’s Climate March?”