This was an area entirely neglected in the MDGs, until 5 years after the charter was published through the addition of goal 5.b, “to achieve, by 2015, universal access to reproductive health.”

This late addition was helpful, but still lacked a rights-based frame. There was zero acknowledgement of sexual and reproductive rights – the very rights the My Body, My Rights campaign seeks to defend.

Amnesty USA’s contribution to this debate has been the submission of a written statement calling for states to guarantee “the full range of women’s and girls’ rights, including their right to decide freely on matters related to their health, sexuality and reproductive life.” 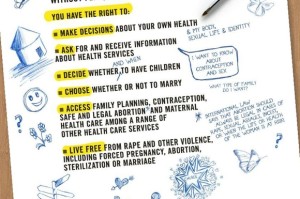 We have also equipped our members with an activist toolkit for calling on governments to support strong sexual and reproductive rights language in the CSW’s negotiated outcome document – the Agreed Conclusions – as well as in next month’s International Conference on Population and Development, the ICPD, which will mark the 20th anniversary of the pivotal Cairo Program of Action.

Happily, there is growing momentum to recognize, support and enshrine these essential human rights this CSW. Speakers from Secretary General of the ICPD, Dr. Nafis Sadik to Princess Mary of Denmark have joined the chorus of voices asserting that sexual and reproductive rights are essential to the world’s next development framework.

Even U.N. Women has published a statement setting out a strong definition of sexual rights, one of the most contested areas in U.N. debates, which hopefully will be a banner governments will take up and endorse in upcoming negotiations.

From the anti-homosexuality law recently passed in Uganda, to the rape of women as a weapon of war in the Democratic Republic of Congo; from the feminization of the HIV epidemic to the 142 million girls who are estimated to be forced into marriage in the next decade, the world can’t afford to wait any longer for global leaders to affirm that these rights are real, and inalienable.

Sexual and reproductive rights are human rights. States have a duty to protect them as a human rights mandate and the key to sustainable development.

Join Amnesty USA in pushing for concrete commitments to sexual and reproductive rights at CSW, ICPD and in the post-2015 development agenda by taking action today! You can also join the conversation on twitter by using the hashtag #MyBodyMyRights.

One thought on “Tell the United Nations: Protect #MyBodyMyRights!”