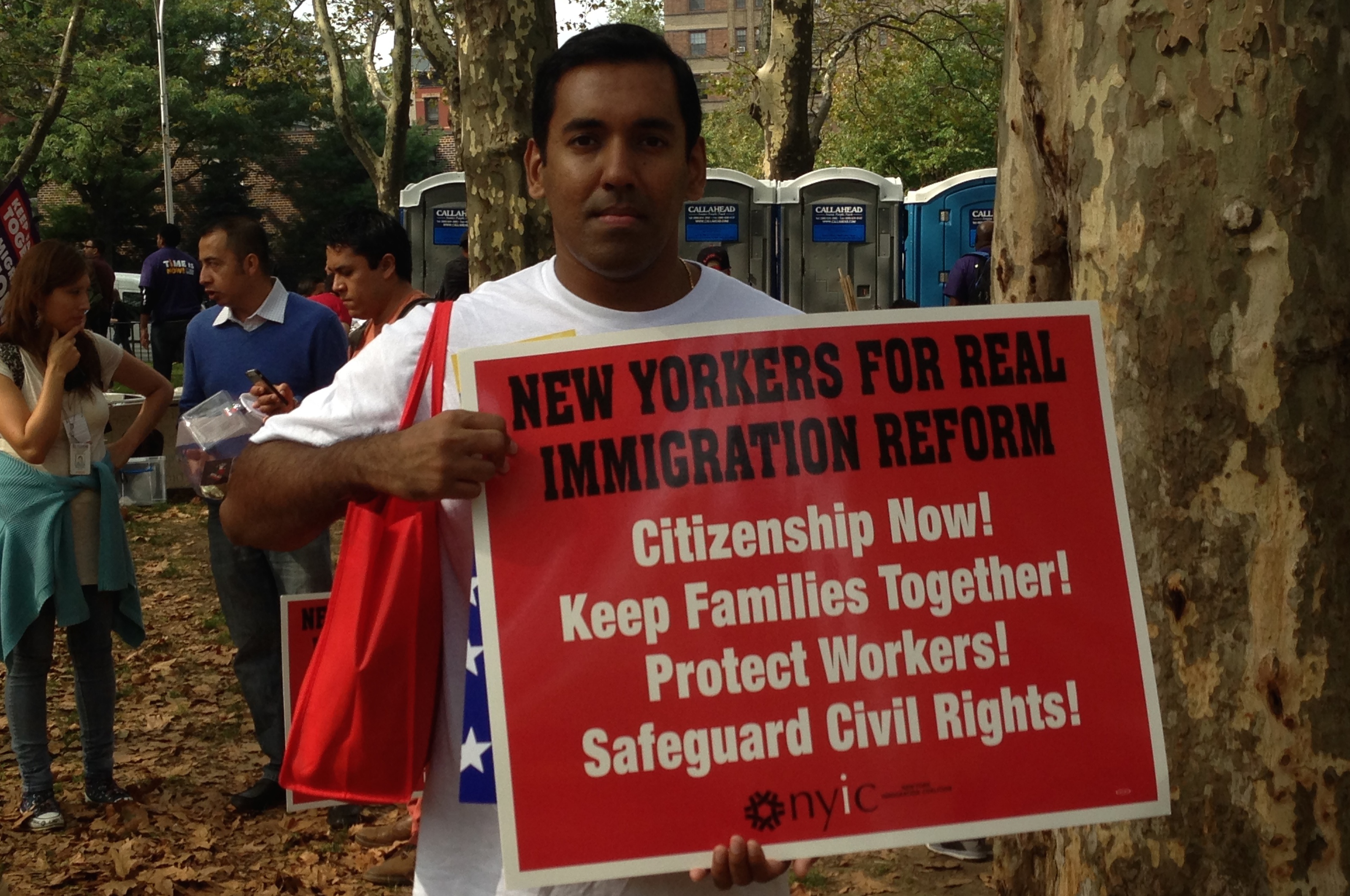 I WORK FOR AMNESTY INTERNATIONAL USA AS: Managing Director of Major Gifts

HOW DID YOU GET THERE?
I got here due to a lot of hard work – the proverbial blood, sweat and tears!  I started off in public relations and marketing almost 20 years ago, but realized I wanted to apply the skills I was learning and create something tangible.

I knew that fundraising would do that for me: fundraising for charities I believe in is my way of re-allocating the world’s resources towards the highest level of good.  Plus, there were solid targets to hit – you either made goal or didn’t!  It worked for a goal-oriented personality like myself.  I therefore became a fundraiser and spent over a decade doing all types of fundraising before joining Amnesty. I wasn’t even looking for a new job when I learned about the Amnesty opportunity, but like lightning, I was struck.  How could you not?  Amnesty is where it’s at!  I have dedicated my entire life to ensuring that all people have access to full and equal rights, respect and dignity.

I worked for the LGBT community. On behalf of disadvantaged students of color. For the South Asian American community. Now at Amnesty, I work with and for those communities, but truly, all human beings everywhere. It’s a dream come true to be an employee and member of Amnesty International, and I am so honored and blessed to be able to dedicate my life to this amazing cause.

WHEN DID YOU FIRST GET INVOLVED WITH AMNESTY INTERNATIONAL?
I’ve always been involved in Amnesty causes like immigration equality, racial justice issues and LGBT community advocacy, but I became involved most deeply when I joined the amazing Amnesty staff team in 2013.

OUTSIDE OF WORK I HAVE A PASSION FOR: Serving on the board of another amazing nonprofit organization, South Asian Americans Leading Together.  Also, I love watching re-runs of Buffy the Vampire Slayer.  Most amazing show e-v-e-r!  Haters may hate, but I’m shaking it off!

WHY? Short of being in person with someone, I enjoy talking to people about causes I care about over the phone.  It gives me an opportunity to convey my passion, emphasize my points, listen to what the other person cares about, and see if there’s a way to align what they care about with what I do.  When that happens…magic!  Our community grows that much more, the music of change adds one more voice to the chorus, and there’s more positive energy in the world.

AN INDIVIDUAL WHO I ADMIRE IS my mother.  She came to this country from India on her own in the early 70’s, having left her family behind to forge a new life in a radically different culture.  She is a true pioneer, and it is people like her and millions of others who make America beautiful.

WHAT WAS YOUR BIGGEST BARRIER BUILDING YOUR CAREER?
So far, the biggest barrier was learning how to be a manager.  It’s one thing to be really good at the content of your job, in my case, fundraising. It’s literally a whole other job being an effective manager.  Years ago I went from one job with no team to, all of a sudden, another job with four people whose careers I had in my hands.  In so doing I learned the hard way what NOT to do.  I came to grips with the situation and what I needed to do.  So, I hunkered down, sought my own management coaching with my own personal money, and worked really hard to be the best possible manager I could be.  Over years of managing teams, I made it a point to be a leader who creates other leaders and to ensure they can do their very best work.  If I don’t, I’m not doing my job.

THE GUTSIEST THING I HAVE EVER DONE FOR HUMAN RIGHTS IS standing up to the U.S. Capitol police.

One day I was walking across the green fields between the U.S. Capitol building and the Supreme Court in Washington, DC.  I see two of my Sikh colleagues talking to a small armament of Capitol police.  I had just seen them 10 minutes prior in one of the Senate buildings, and we were all on our way to a conference on the Hill.  I didn’t think anything of it, but quickly realized that they were being interrogated by the police in a menacing way. There was a small group of our colleagues gathering around, so I joined them.  It turned out that someone called the police on the Sikh men because they were deemed “suspicious” for loitering in one of the Senate buildings!

I couldn’t believe it – they were being racially profiled based on their skin color and turbans in, of all places, the People’s Place – in front of the U.S. Capitol! I told the police that I can vouch for them and our reason for doing business on the Hill, but they didn’t believe me.  I placed a call right there to someone who could be helpful and continued to advocate.  A little while later they were free to go.  One of the men later told me he appreciated my standing up for them, and it was only then that I realized that I had done something gutsy.  I could’ve been detained, too, but honestly, that didn’t occur to me at the time.

AS AN ACTIVIST WHEN WERE YOU MOST OUT OF YOUR COMFORT ZONE?
I decided to march with the South Asian Lesbian and Gay Association of New York during the India Day Parade in Manhattan a few years ago.

The parade organizers had recently agreed to allow the group to march as an official group after years of excluding us.  Now, it’s one thing to march in the LGBT Pride March in New York where people on the sidelines overwhelmingly support and root for you.  I thought it would be a whole other thing to be marching as the LGBT South Asian group among a mainstream Indian community.  Knowing how conservative the South Asian community could be on LGBT issues, I wasn’t sure how we’d be received.  I was wondering whether we’d be heckled…or worse.  Despite some reservations and butterflies in the stomach, I mustered the courage to join the group in the march.  And you know what?  It was awesome.

People mostly just stared at us, some people clapped for us, but for the most part, it was rather sedate.  It was powerful just being present and staking our claim as part of the community, and we were changing hearts and minds with every marching step we took.  I took a huge sigh of relief at the end, realizing how amazing it was to step out of my comfort zone and experience something like that.

THE MOST IMPORTANT CLASS YOU TOOK: Type-writing class in high school.  I know, not what you expected, right?!  But seriously, knowing how to type accurately and really fast basically has made my studies and professional life so much easier!

WHAT SPARKED YOUR PASSION FOR HUMAN RIGHTS WORK?
I was a shy 10 year-old when I was getting my hair cut at a barber shop.  My mother was waiting in the car for me.  After a few minutes, my mother comes in with two men following her.  I hear one of the men demanding my mother’s papers, asking if she’s supposed to be here in the country.  My mother is shrinking, and no one is helping.  I’m boiling mad but fixed in my seat because I literally have scissors at my head.  During this man’s tirade, I boil over and exclaim “she’s an American citizen!” and they quiet down.  The harassing man leaves.  I had to help my mother out, but I was also enraged that someone would treat anyone so disrespectfully and assume they don’t belong.  Ever since, I stopped being shy and decided to use my voice to ensure that we are all treated equally, with respect and dignity, and to show the world that we all belong in it.

Meet Sunil and hundreds more on March 20-22, at our biggest human rights conference of the year in Brooklyn, NY. Nearly 1,000 activists are expected to attend what will likely be our largest Annual General Meeting to date. Register online here!

4 thoughts on “Meet Sunil at the AGM: Managing Director of Major Gifts”