This year marks the 25th anniversary of the “16 Days of Activism against Gender-Based Violence” (16 Days) campaign, originated by the Centre for Women’s Global Leadership (CWGL). The campaign takes on a specific theme each year, which is determined by consulting with the many international human rights groups working to end gender-based violence (GBV). By calling upon individuals and organizations around the world to take action against GBV, the 16 Days campaign has had a significant impact and great success in building support of and activism for the prevention and elimination of violence against women and girls for more than two decades.

The 16 Days campaign is exactly that —16 days of global activism, starting with the International Day for the Elimination of Violence Against Women on November 25th and leading up to Human Rights Day on December 10th. During this time, Amnesty activists and members advocate for and with those who experience gender-based violence around the world. With the launch of Amnesty International’s “I Welcome” Campaign this year, AIUSA has dedicated its 16 days of activism to highlighting how GBV affects refugee women and girls and LGBTI refugees.

By the end of 2015, there were more than 21 million people seeking refuge worldwide. Many refugees are fleeing violence and persecution — situations that force them to unwillingly leave their homes and families. Becoming a refugee often also puts them at risk for other violations of their human rights, especially when their intersecting identities are perceived as a reason to commit further violence against them.

For women, girls, and LGBTI people, being a refugee can be particularly dangerous. Sometimes, the reasons they are threatened and harassed as refugees are the reasons they left their countries in the first place. Patricia* is a trans woman from El Salvador who fled to Mexico because of the persecution she experienced by gangs and the police in her home country. She says:

They said they did not like me because of ‘who I am’. I was threatened by gangs as well – each month they charged me ‘rent’ but I was not able to pay it all. I believe I was threatened because of discrimination or homophobia, because of who I am. I had thought about going to the authorities but I realized that they were the same people who were harassing me.

The increasing amount of violence in the countries known as the Northern Triangle (El Salvador, Guatemala, and Honduras), where Patricia is from, have resulted in massive upticks in migration and displacement, just as escalations of violence in other places around the world cause more people to flee their homes and become refugees. Refugees and displaced persons often experience violence and other human rights abuses while traveling between their countries of origin and their destinations. By welcoming refugees, governments and citizens can help to prevent widespread gender-based violence and protect those who are most vulnerable to the many human rights abuses faced by displaced persons. 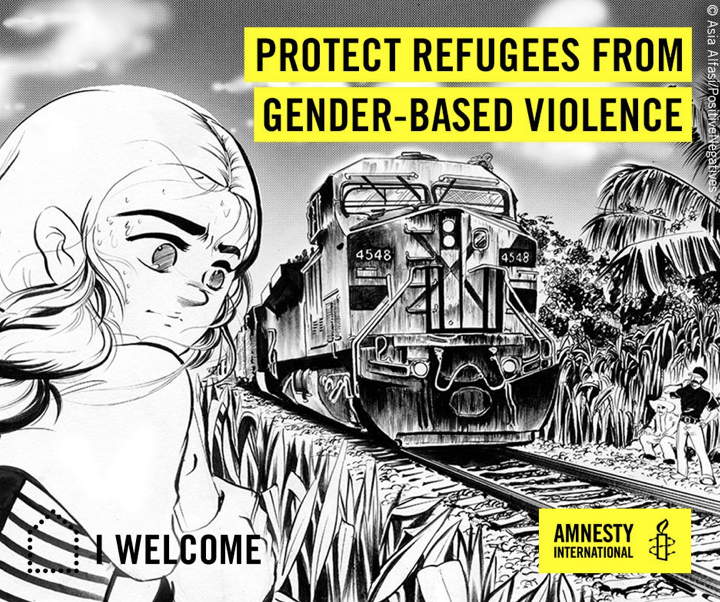 Individual stories like Patricia’s help highlight the way human rights crises affect individuals in different and complex ways. As part of the 16 Days of Activism campaign this year, AIUSA commissioned a series of illustrations to accompany these stories, examples of which are included in this post. To see more of them, follow @AmnestyWomenRts on Twitter and @AIUSAWomensHumanRightsNetwork on Facebook.

Human rights are the cornerstone on which Amnesty International bases its work — but it would be impossible to do the work without listening to the stories of individuals who are most affected when these rights are threatened. Gender-based violence happens to women and LGBTI people simply because of the identities they embody or are perceived to embody. GBV is also used as a tactic to threaten women and LGBTI people when they work to promote and uphold other human rights. 16 Days recognizes that all forms of GBV are against international human rights law, and the activists who work and volunteer for Amnesty know that we will have to defend human rights on multiple fronts — including rights for refugees, LGBTI people, and women — in order to end GBV as a tool of abuse and repression.

It is therefore important to note that 16 Days also encompasses International Women Human Rights Defenders Day on November 29th each year. Women Human Rights Defenders (WHRDs) face multiple risks when they advocate for their own rights and the rights of others, including the use of retaliatory GBV. Amnesty International USA is currently highlighting the cases of four WHRDs for its annual Write for Rights campaign. To celebrate Human Rights Day and the last day of the 16 Days of Activism, write a letter on December 10th in support of one of these women, or any of the Write for Rights cases showcased on the website.

There isn’t much time left in the 16 Days of Activism for this year, but you can still take action to promote the rights of refugee women and girls and LGBTI refugees. Make the pledge to #WelcomeRefugees, and call on Congress to increase the number of refugees who are resettled in the United States. You can also learn more about 16 Days and the Women’s Human Rights Network on Twitter and Facebook.

You, too, can be a Human Rights Defender when you stand up for the rights of those affected by gender-based violence and the global refugee crisis, both during the 16 Days of Activism and beyond.

5 thoughts on “Why We Need to Address Gender-Based Violence, Now More Than Ever”