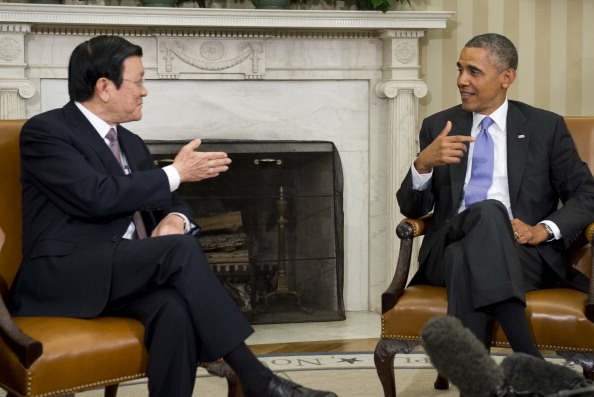 President Truong Tan Sang is only the second Vietnamese president invited to the White House since the normalization of ties between the former war foes (Photo Credit: Saul Loeb/AFP/Getty Images).

President Truong Tan Sang of Vietnam visited the United States this week to meet with President Obama. At lunch Wednesday with Secretary of State John Kerry, he expressed his desire that Hanoi and Washington deepen their economic and security ties.

The United States and Vietnam have come a long way since the end of the Vietnam War, but President Sang should realize that absent significant progress on human rights, his hopes for building a closer relationship with Washington may be dashed. Popular and congressional support in the United States for forging a strategic partnership with Vietnam will hinge, in large measure, on whether the Vietnamese government demonstrates a deeper commitment to freedom of expression, freedom of religion and justice.

President Sang should realize that absent significant progress on human rights, his hopes for building a closer relationship with Washington may be dashed.

”
I was pleased to visit Vietnam last spring on behalf of Amnesty International to launch a human rights dialogue – the first visit by a representative of AI since 1988. I saw first-hand a Vietnam that is engaged in a great national discussion of human rights. And I had the opportunity to exchange views with people in and out of government on many sensitive topics, from minority rights to land grabs to policing the blogosphere.

Amnesty International looks forward to a follow-up visit to deepen our understanding of the daunting human rights challenges in Vietnam and to identify ways in which the people and government of Vietnam might begin to address them.

As the U.S. State Department reports confirm, Vietnam’s overall human rights record continues to disappoint – the government severely restricts freedom of expression and association and punishes those who dare to criticize government policies and senior officials. Pro-democracy activists, bloggers, labor rights advocates, and those calling for reform or protesting about environmental issues are especially at risk. Hanoi also discriminates against members of religious and ethnic minority groups perceived to be opponents of those in charge.

In recent months, Vietnam has intensified its clampdown on freedom of expression. The government has sentenced dozens of dissidents to lengthy prison terms since 2011, including 38 this year alone. Amnesty International has designated some of these political prisoners to be “Prisoners of Conscience.” One of them, a blogger named Nguyen Van Hai, was sentenced at the end of 2012 to 12 years in prison for “conducting propaganda” against the state. He has been on a hunger strike since mid-June and is reported to be in grave health.

Ambiguities in Vietnam’s laws contribute to an environment ripe for human rights violations. The authorities use vaguely worded provisions of the national security section of the 1999 Penal Code to justify their clampdown on human rights. Article 79 (aiming to “overthrow” the state), Article 88 (“conducting propaganda” against the state), Article 87 (undermining the “unity policy”), and Article 258 (“abusing democratic freedoms” to infringe upon the interests of the State), are all used to stifle criticism and detain dissidents.

Vietnam’s justice system falls well short of international human rights standards. Once arrested, dissidents are often held incommunicado for up to 18 months. Defense attorneys are kept from consulting with their clients until shortly before trial, making it difficult to prepare an adequate defense.

Moreover, defendants do not enjoy the slightest presumption of innocence and have no opportunity to call on witnesses to testify on their behalf. In some cases, police beat detainees during interrogation and authorities harass family members and supporters of dissidents simply attempting to observe trial proceedings.

Despite all of these serious human rights challenges, there are grounds to be hopeful about Vietnam’s future. The Vietnamese people are dynamic and they are engaged in a broad discussion about their rights – an animated and sometimes raucous debate that includes the prospect of constitutional reforms. The Vietnamese government should foster this discussion and embrace reforms. Vietnam’s economic vitality and overall quality of life will best be secured when the Vietnamese government honors and protects the rights of each and every Vietnamese citizen.